This is an older battle report I've just gotten around to posting.

With the release of Red Bear and Grey Wolf earlier in the year our local Soviet guru, Robert and I got back to some Eastern front action. I decided not to bring out the ever deadly Jaakari Company and went with a Panssarikomppania. The Finnish with their beg, bought and captured equipment are still my favorite FOW army to run.
The list was:
Robert was relishing using some of the additions in Red Bear, especially the SU-100's being available in most lists.
His army was something like:
We rolled for free-for-all and the terrain was suitably Eastern European. The pictures are rather sporadic, I'm trying to be better at keeping track of the action.

The battle was long and bloody, after a wild furball in the center village decimated the Soviet T-34's things looked grim for the Russians.
However, in the end the 10 Matildas overwhelmed the 3 Finnish T-34/76's on the left and took the objective. The StuG's moved to contest, but the surviving T-34's used the new hen and chicks to rush out their max 12" and go for flank shots, which they hit.
The KV-1's moved to take the center objective and the SU-100 on the left moved to counter them. The Finnish CiC killed the last of the T-34's, but the Soviet CiC was contesting the objective the KV-1's were on. With no one to contest the objective the Matildas had, victory went to the Soviets.

It was a wild fight, I was relying on air power to help out with the heavy Soviet heavy armor but it had little impact in this game. The artillery bit the  dust early, and I think a platoon of fearless Finnish infantry dug in on one of the objectives would have been more useful. The line of site on the board was very limited so the Pak 40's had few targets for most of the game.

Also my three T-34/85s holding off four of the SU-100's was mainly due to chance. They killed two of the SU-100's and two T-34s all the while not being hit in return, I can't expect that to happen all the time. The Spetsnaz hid in the woods near my right objective the whole game and keep me from moving my T-34s to help in other areas.

In all a great game.

Earlier in the year the Flames of War group in Auburn, AL got together for a mid war battle royale in the desert. We are mainly a late war group but I've been encouraging others to expand into mid war, there has been no luck getting people on the early war train.

On the Allied Side we had two American Players and one British Player. The three Allied tank companies were heavy on Shermans. The Axis side saw two German players and one Italian. The Germans were both Tank companies while the Italian was an infantry company, they were a little outnumbered in the tank department.

We made a custom mission with a central object and one in each sides deployment zone, to win one side had to control all the objectives. For this game at least the mission worked great, we also continued to battle if one company broke. 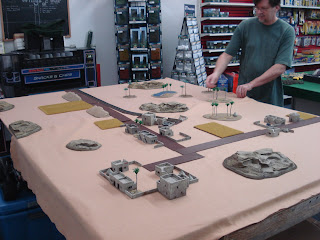 The Italians, while lacking in picture, dug in around the Axis objective and held it against the British for the entire game. Although the Sherman has a good armor and armament in mid war, the Panzer IV F2's fired and stormtroopered behind cover time and time again, slowly whittling away at them. A fun game and with a failed stormtrooper move or two the result might have been very different.

I'll start things off with the next big thing on my workbench, the forces of Pelargir and the Army of Southern Gondor.

For anyone who is not familiar with the Lord of the Rings, Pelargir is a port city in southern Gondor on the Anduin River. The city is ancient one of the first cities founded by the Numenoreans when they returned to middle earth. All of that was probably Greek to a lot of people, but I sure love Tolkein's middle earth history.

Being the a Tolkien fan I chose a little known city and it's part in the War of the Ring to convert and paint, Pelargir. If you blinked during the movie you missed it, nor was it mentioned, but to me that meant it was fair game to put my own spin on.

I've used some old GW Numenoreans as my Wardens of Pelargir since it is an old city with a strong maritime tradition. I image the Wardens as holding to older traditions and primarily operating in and around the city.

The archers received a slightly different trim to differentiate them from the front line troops. I intend for this branch of the Wardens to patrol the wall of the city and operate the siege engines in time of war.


I have a large order of Perry Brothers and Gripping Beast miniatures order that will begin to fill out the ranks of the Gondor's army on it's southern border. The Army of Southern Gondor will represent my first foray into casting my own parts.

Posted by Amroth at 8:10 AM No comments:

And so it begins

So this is the first post on my new blog.
The blog will focus on things I'm interested in, particularly miniature war gaming, both historical and fantasy. So think of it more as a project log for my miniature painting.
Posted by Amroth at 1:23 PM No comments: