This week it's the High Elf infantry!

I love the notion of each region of Ulthuan providing unique troops to the larger High Elf army. It made for a diverse force that is still cohesive because of the armor and weapon aesthetics. While the mounted troops of the High Elves are great, the infantry are where the elves shine. The stalwart Spearmen and Sea Guard, keen eyed archers, terrifying Phoenix Guard, vengeful Shadow Warriors, brave White Lions and whirling Sword Masters made the High Elf army elite.

The Swordmasters of Hoeth were super cool and my favorite unit. For the Storm of Chaos worldwide campaign in 2004, one of the events that the local shop ran was to bring a single unit with a lord character in it. There was no points limit of the unit, so I brought a 20-man Swordmasters unit with a lord. The unit had some banner that made them stubborn and the lord was fully kitted out. I just remember them completely surrounded by hundreds of Nurgle Daemons killing everything until the last of them (the standard bearer) was pulled down. The lord took down a couple of Nurgle heralds before taking a charge of some Nurgle beasts alone, it was epic! The highlight of the event was a Daemon Slayer fighting Archaon for three full turns before being struck down, what a mighty doom! He even brought the Lord of the End Times down to his last wound... well Archaon's sword helped the Dwarf out too. The Chaos forces won handily as they had almost twice the players as the good side, but we on the good side agreed to play it out as fighting against overwhelming numbers made perfect sense.

Anyways, I had some good times with the pointy eared elves. In truth this whole project can be summed up as pure nostalgia. However it is a fun break to paint up some gaudy elves instead of drab historical miniatures all the time.

Next up to paint, thirty White Lions! 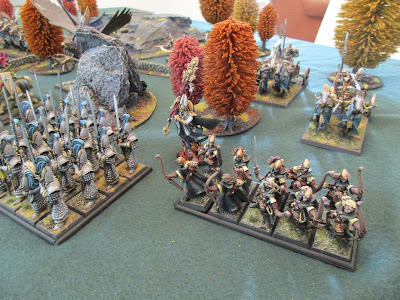 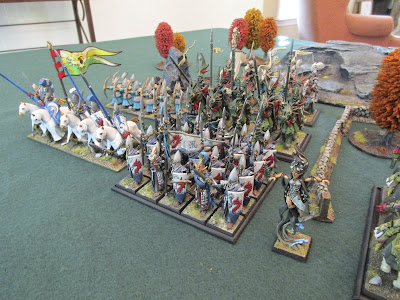 Throughout my life I've made some poor decisions, one of those decisions involved a High Elf army.

Way back in the day, when I first went to England in 2002, I was a young foolish lad. I had a great time and was amazed at all the wargame stores and gaming. So I thought, "I want to get in on this" and 4,000 miles from home I bought almost and entire High Elf army! Spent a lot of money and carried all that heavy metal crap around in my suitcase for a week. When I got back to the states I painted everything up and hitched a ride to the closest game store to play my first game of Warhammer! I showed up and got a few games and had fun, but I noticed that right there in the store, close to home, were all the High Elf mini's that I had toted all over the UK...

However none of that kept me from enjoying Warhammer Fantasy for a while. I latter shifted into playing the Empire and had a blast during the Storm of Chaos worldwide campaign. Over the years those High Elves gathered dust in my closest before I traded some of them and used many of the remaining for various bits. However I still loved the lore and books of the Warhammer Old World.

When Games Workshop decided to blow up the planet and restart with Age of Sigmar I had been long gone from the game (except for one 8th edition game I posted abut here). For some reason it still made me really sad how they did things, destroying the entire universe? I really liked the rich history of the Old World and all the nations and races. So it would seem like a really weird time to get back into painting up the now extinct High Elves. But I pulled my old minis out and picked up many new plastics for almost nothing on Ebay and my oldest miniature wargaming army began a new life!

It has still been years of slow painting to get things where they are now and I still have much more remaining to paint. But the upcoming release of Warhammer: Total War II has really rekindled some interest in my High Elves. Long live the Old World!