A few weeks ago someone on the Battletech forums requested I do a tutorial on how I base my miniatures, fast forward to this week when I received my new BT introductory box and several new Alpha Strike lance packs. This order will help me fill out my Davion and Kurita lances and add my first lance of Wolf's Dragoons!

I will be using a Raven, Enforcer and Battlemaster as my examples. The Raven and Enforcer will be replacing the Raptor and Bushwacker in my Gun Dogs force, for the times I want to run that force in the Succession Wars era. The Battlemaster will be painted up as a Davion Guards HQ mech.

I chose these two in order to show you two different ways of basing the plastic BT miniatures. The Raven has been cut from its base and glued to the new Gamecraft miniatures acrylic base because I wanted to change its pose. Both the plastic Raven and Stalker look horrible in their poses, they look like they are comically falling backwards... The Enforcer was just glued base and all to acrylic hex base.

For the miniatures with the larger plastic stands I use a resin and sand jell medium. This is normally used to give texture to painting canvas, however it is perfect for basing, as it is a flexible jell that will hold and also will not chip or break. I just use a old broken paintbrush to pile the medium up around the stand. 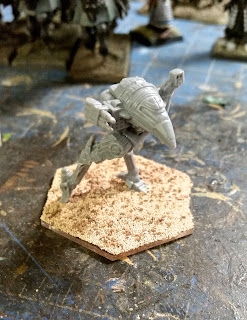 For the Raven which has no stand to cover up, I just coat the base in white glue and dip it into a bag of sand (I use a mixture of small and large sand). I also use the sand mixture on the Enforcer with the jell medium base to cover up any seams between the stand and the jell. 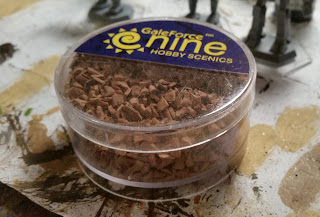 I then add small rocks to the bases in order to add different scale and texture. I use some from Gale Force Nine (because I found them on sale) but you can use whatever you find around your house.


Then I spray them with black primer. 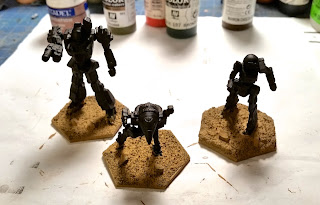 Following the spray I then paint the bases in a darker color and then drybrush them with a lighter shade (in this case a desert tan color).


Here you can see the finished versions of each of the miniatures. The final touches on the bases is the addition of grass tufts.  I mainly choose the base color in order to contrast well with miniature paint scheme itself.

So there you have it! This is my process when basing my miniatures, whether Flames of War, 28mm or Battletech.

Posted by Amroth at 2:48 PM No comments: