This weekend at the shop I decided to run all the Hetzers I had. My initial thought was to use the Hungarian Assault gun list in order to get veteran Hetzers and some good support. However I bit the bullet and used the Confident Trained Hetzers from Grey Wolf. Trained is not typically my first choice but I couldn't deny that I would be getting lots of platoons in this army and the support was veteran. So here is the list i ran: 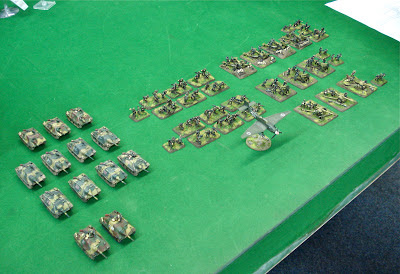 When I got to the shop I ended up facing off against Robs Soviets. He was running a Motostrelkovy, that was loaded for Bear, or perhaps Grey Wolf... Okay, moving on his list was something like: 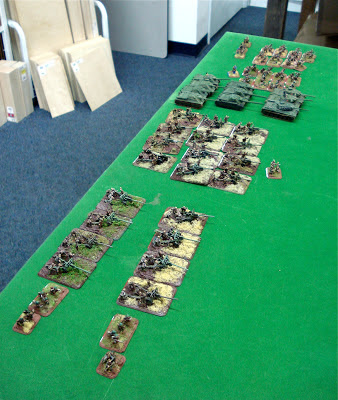 With ten front armor 9 and 10 Armored vehicles and eight anti-tank 11 guns for my trained Hetzers to deal with, things were not looking good. Then we rolled for the mission and got Breakthrough, I was the attacker and the defender had mobile reserves so that meant only one of his armored units would start on the board, that helps some.


Robert deployed a platoon of 57's on a hill overlooking my deployment, with a infantry screen in front of them. He chose the SU-85m's to start on the board, with their front armor 9 and gun of AT12 I needed to avoid shooting it out with them. I deployed as close to Robs troops as I could, I also decided to use my 105's breakthrough gun to dig out the 57's. I left a platoon of Hetzers, the infantry and my Pak40s in reserve to come on behind him.

The first turn I made a very big mistake, I forgot to move and started shooting, I then failed all my stormtrooper moves to spread out. Not only was I a huge target for his artillery I had planned on assaulting the first turn, on well.
His SU-85's killed one Hetzer and bailed another, his 76mm guns firing a bombardment also managed to destroy a Hetzer, I rolled a 1 and he rolled a 6.


The second turn I was able to move up and Assualt the infantry and kill all within range, the last 57mm gun was also destroyed but the platoon passed moral and upinned. The Hetzers then began to move around the hill towards the objectives. His AT rifle missed his shot and was killed the next turn.

On turn three I got my first platoon from reserves, the Hetzers came on behind his assault guns.
They were able to move up and kill two of the SU-85's. In his turn he got no reinforcements, his second platoon of 57mm guns bailed one of the newly arrived Hetzers.


On turn four I got another platoon from reserve, and brought on a grenadier platoon, they moved towards the bogged 85. During the Soviet turn my lack of respect for his 76mm guns nearly cost me a platoon, Rob had been moving his 76mm guns towards the objective. He fired with one gun in close range and several others at long range. He hit the Hetzers three times and I rolled three ones. This resulted in one Hetzer destroyed one bailed and the previously bailed Hetzer running. But luckily I passed my moral check and they stayed on the board.


On turn five I get more reserves and Pak40's come on behind a hill to hide. I decide it is time to roll for planes and my Stuka G's show up to take on the Soviet tanks. My Hetzers kill the the SU-85's, my artillery pins his artillery and infantry and kill a team or two. The Stukas bail a IS-85 and kill two 57mm guns and one 76mm gun. The Soviet guns fail to unpin and everything else is to far from the objectives, we call it then. A 6-1 for the Hetzers, woohoo, although if the SU-100's and IS-85's had shown up earlier it would have been a very different game.

Work has been very busy for the last few weeks, between photographing academic awards ceremonies and college football tailgates, my free time has suffered. However somehow I've managed to squeeze in a little painting. Thanks to my local hobby shop tempting me with the beautiful Warlord Games Bolt Action miniatures, I'm back to painting 28mm.

Some of the guys in the shop were talking a few weeks ago about Bolt Action and I mentioned how much I like the Fallschirmjager mini's, guess what was on the shelf the next week, blisters of Fallschrimjager. So displaying my usual lack of self control in the hobby shop I left with all the Fallschirmjager they had. I can't resist these great miniatures of the battle worn German Paras. Then of course I needed the Bolt Action Rulebook, dice and support weapons for my platoon, its a dangerous cycle, getting into new games.