I know, you're thinking Battletech, that's all about giant stompy robots. You would be right about that, but giant stompy robots, I would imagine, are difficult to build and in a huge galaxy each planet would still need to be able to defend itself. Thus the good ole battletank is still around and kicking/rolling. For Battletech Alpha Strike I have build a combined force of not just battlemechs but also tanks, infantry, battlearmored infantry and aircraft. The other vehicles give a great sense of scale to the battlemechs that really make the game more immersive.

Below you will see three Patton/Rommel tanks made by Ironwind Metals. They originally had odd protrusions on the sides of the turrets that I cut off and replaced with some FOW Panther tank schurzen. In Battletech the tanks are still very dangerous and tough to knock out. I look forward to using these soon! 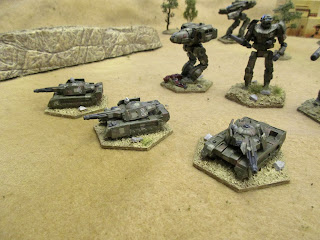 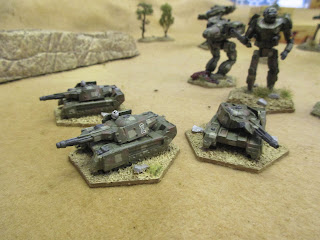 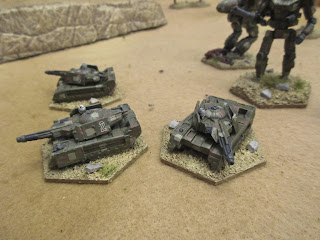 The last picture is of two Goblin Tank/APC's and a venerable Vedette medium tank. I plan on adding more of these smaller more maneuverable tanks in the future. 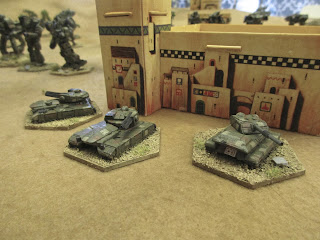 Posted by Amroth at 7:07 AM No comments:

Email ThisBlogThis!Share to TwitterShare to FacebookShare to Pinterest
Labels: Battletech

Recently I began to repaint my American Tank force as I really wasn't happy with how they originally turned out. I wanted to make a force that would roughly represent the 2nd Armored Division or most any other division if I needed to. I am in the process of repainting all the supporting vehicles now.

Posted by Amroth at 9:42 AM No comments:

Battletech Alpha Strike - The Next Generation 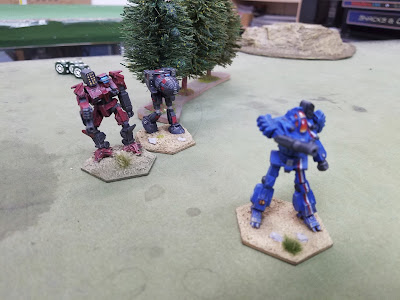 A couple of events have come together to get me back into playing Battletech Alpha Strike. Over the last few months I have enjoyed painting up some of my Battletech miniatures that have been wasting away in boxes for years. Then my friend Bryan, who happens to be a huge Battetech/Mechwarrior fan, moved back into the area. As I found out with my FOW Six Days War gaming and rules, it is impossible to stay motivated about a game, if no one else is interested and our gaming group here has virtually disappeared. So Bryan and I got together and started talking about Mechwarrior online and the new Battletech computer game, I then mentioned that I still had all my Battletech miniatures and well, thats all it took!

We played a few games to just knock the rust off and then meet up at the shop for a larger game. One quick complaint, I bought the Alpha Strike rulebook years ago when it first came out and since then there have been many changes. While I have found various FAQ's and posts online about the updates and changes I am still struggling to know what has changed and what is the same. I wish there was a clear official document with everything laid out.

The game of Alpha Strike that we played this weekend was a 200 pt Inner Sphere battle. We just mixed and matched random mech that we liked to get our lists.

My force consisted of a Stalker, Centurion, Mauler, Wolfhound, Black Knight, Crab, Cyclops and an Enforcer.

Bryans force contained a Thunderbolt, Battlemaster, Warhammer (he substituted a Hammerhands model as he hates the IWM Warhammers), a Bushwacker, Zeus and a Stalker. He had a smaller force as most of his mechs were better models and better trained. 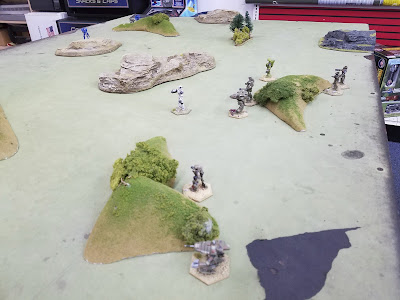 We set up the board with some general terrain but later realized it was pretty wide open for Battletech Alpha Strike as almost all mechs could be hit from nearly anywhere.

I deployed my force mainly center and to the left as I planned to shift my faster forces to where I needed them the most. Bryan spread his rather evenly across the board.

My center force moved to the left to go after his heavier elements for a few turns. The first couple of turns saw a few shots back and forth but little to no damage dealt, my Wolfhound did take a stray shot and loose its armor.

Turn three ended up being the turn where the game was likely decided. He had the initiative and were alternated our moves, then I began shooting. I had all eight of my mechs able to shoot. His Battlemaster and Stalker were the primary targets as they were the most dangerous. All eight mechs fired and when the dust had settled only a single mech had hit taking two armor off the Battlemaster. The average score to hit was an eight on two six sided dice...

Bryan's choice to increase his pilots skill then paid off. The Battlemaster, Stalker, Thunderbolt and Zeus returned fire and all hit. They absolutely gutted my Stalker and hit the Enforcer and Cyclops.

I really thought the game was done after turn three as four of my mechs already had suffered critical hits that limited their performance and I had landed only a total of two hits against all of Bryan's mechs.

However things looked a little brighter this turn as several of my medium mechs hit the Zeus. Then the Centurion and Black Knight combined to totally destroy the Warhammer, even if the Black Knight did have to overheat to do so. As expected Bryan's mechs finished off the Stalker. It couldn't escape as it is not a fast mech regularly and one of the critical hits had halved its movement. The Mauler to a few hits as did the Black Knight.

On turn five Bryan moved his Thunderbolt around to face the damaged Mauler and shifted the rest of his forces toward the center. I jump the Enforcer right up to his Zeus, and also to draw fire away from my healthier mechs.

The Enforcer, of course, misses and is annihilated in return and his Thunderbolt destroys my Mauler with the Mauler missing its last shots back. The Centurion gets behind the Zeus and finally takes it down.

Bryan jumps his Thunderbolt into my forces but I am able to move behind him. The Crab takes a point blank shot at its back and misses. The Wolfhound hits but its damage is reduced due to a critical hit. However the Centurion hits the Bushwacker at point blank range and puts one damage on structure, I then roll boxcars on the critical and destroy it! A shot right to the cockpit. That lets me cool the a heat point down on the Black Knight.

There is little movement as most things are trying to avoid being seen. The crab does poke its nose around to shoot the Battlemaster but misses, the Battlemaster does not miss and destroys the crab.  I land a few hits from the Cyclops and Centurion on the Battlemaster. All the while the terrifying Stalker is backed against a hill watching the entire board ready to kill anything I move out with its horrifying 6 damage at medium range.

On the next turn the Thunderbolt moves around and knocks out the Cyclops, but I do destroy the Battlemaster and am able to remove the last heat from the Black Knight.

In the most cinematic moment of the game the badly damaged Black Knight, dragging itself forward with a destroyed leg, takes aim and overheats all its weapons to try and take out the Stalker. In game terms I was just able to get to medium range, with my movement halved from a critical hit, where I could overheat my weapons to do more damage. I then hit his untouched Stalker with a whopping seven damage. Unfortunately the Stalker has plenty of armor and destroys the Black Knight in return.

The Wolfhound and Centurion rush forward and fire on the Thunderbolt but only the Wolfhound hits, doing two damage and a crit! I roll a 5 meaning there is no additional effects from the critical.

The last few turns came down to a David and Goliath struggle, my two mechs were outweighed by 65 tons. But they wouldn't let the Black Knights sacrifice be in vain! Both fired on the Stalker and hit doing two criticals, destroying a leg and damaging its targeting computer.

Alas, it would not be enough. The Stalker, even with a damaged targeting computer, destroyed the Wolfhound. The Centurion did hit the Thunderbolt on the last turn and damaged its weapons, but the return fire was too much for the little mech. In the end the Stalker had four points of structure remaining, the Thunderbolt only one.

The game turned out to be an incredibly fun one, even though I thought that it was over in the third turn.

I'll leave you with a teaser of whats to come! 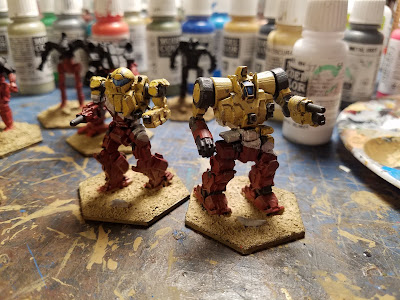 Posted by Amroth at 9:51 AM No comments: