One of my resolutions last year was to purchase more terrain for gaming. In the shop we had a great deal of European terrain and buildings but very little Middle Eastern/North African. Therefore when I first jumped into 15mm Arab Israeli Wars I knew that I needed to work on changing that. I began by picking up some of Battlefronts terrain, but the line is somewhat limited. Then at the end of 2014 I found out that Crescent Root Studios was making terrain again. The 15mm Desert line is now made of mdf board assembled, textured and pre-painted. I was a little uncertain of its toughness but I went ahead and picked up the Build Set 1.

Spoiler! It was an incredible buy! 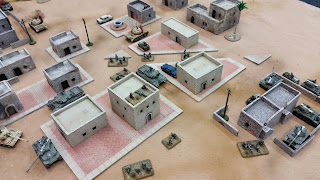 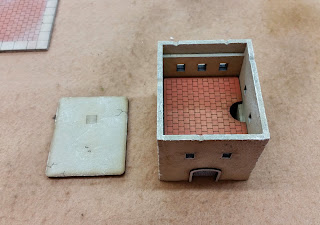 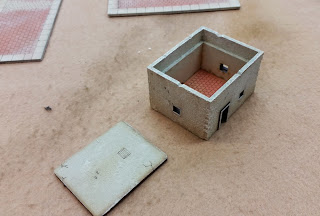 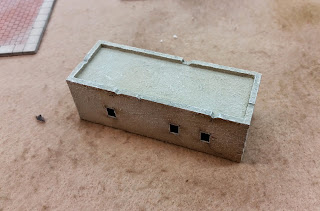 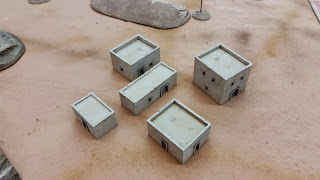 The Building Set 1 contains five small and medium size buildings, three have removable roofs and one has multiple floors. As I mentioned above they are entirely pre-painted and textured, and can be purchased in three different colors, White, Sand and Salmon, I went with sand.

My main concern was with how sturdy they would be, no concern now. The buildings are dense laser cut mdf board and even have additional panels inside to reinforce the walls. They will not be coming apart. The textured paint on the outside seems sturdy and not prone to chipping. The doors are amazing, the detail on these tiny buildings is incredible!

Building Set 1 is priced at $34.00 for the five buildings and is well worth the price. 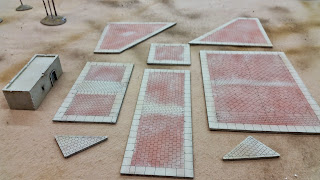 Perhaps the best buy I made was the series 1 Bases. These are pre-painted, brick bases that add so much to the tabletop. The bricks are laser cut into the base. When you place the buildings on them it really adds a level of detail previously missing from my gametable.

The set I bought has 8 pieces, as seen above, for $26.00. and is certainly worth it. These are large pieces and as you can see in the very first picture, these bases make a great city set up. 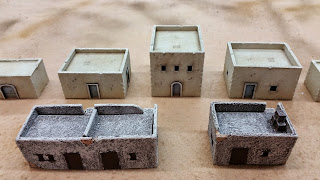 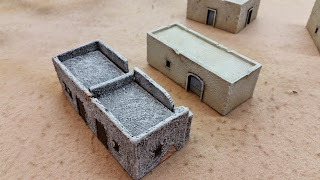 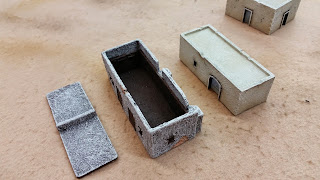 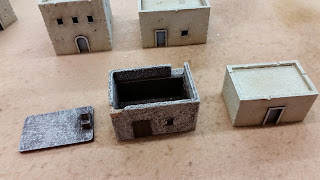 The last pictures are compared with Battlefronts pre-painted desert buildings. After comparing them side-by-side I went back and repainted by BF buildings to be lighter. I highly recommend checking out the Crescent Root buildings.

Also stay tuned because I have picked up Crescent Roots building set 2 and some of their city accessories that really help make you gaming table come to life!

Posted by Amroth at 8:02 AM No comments: 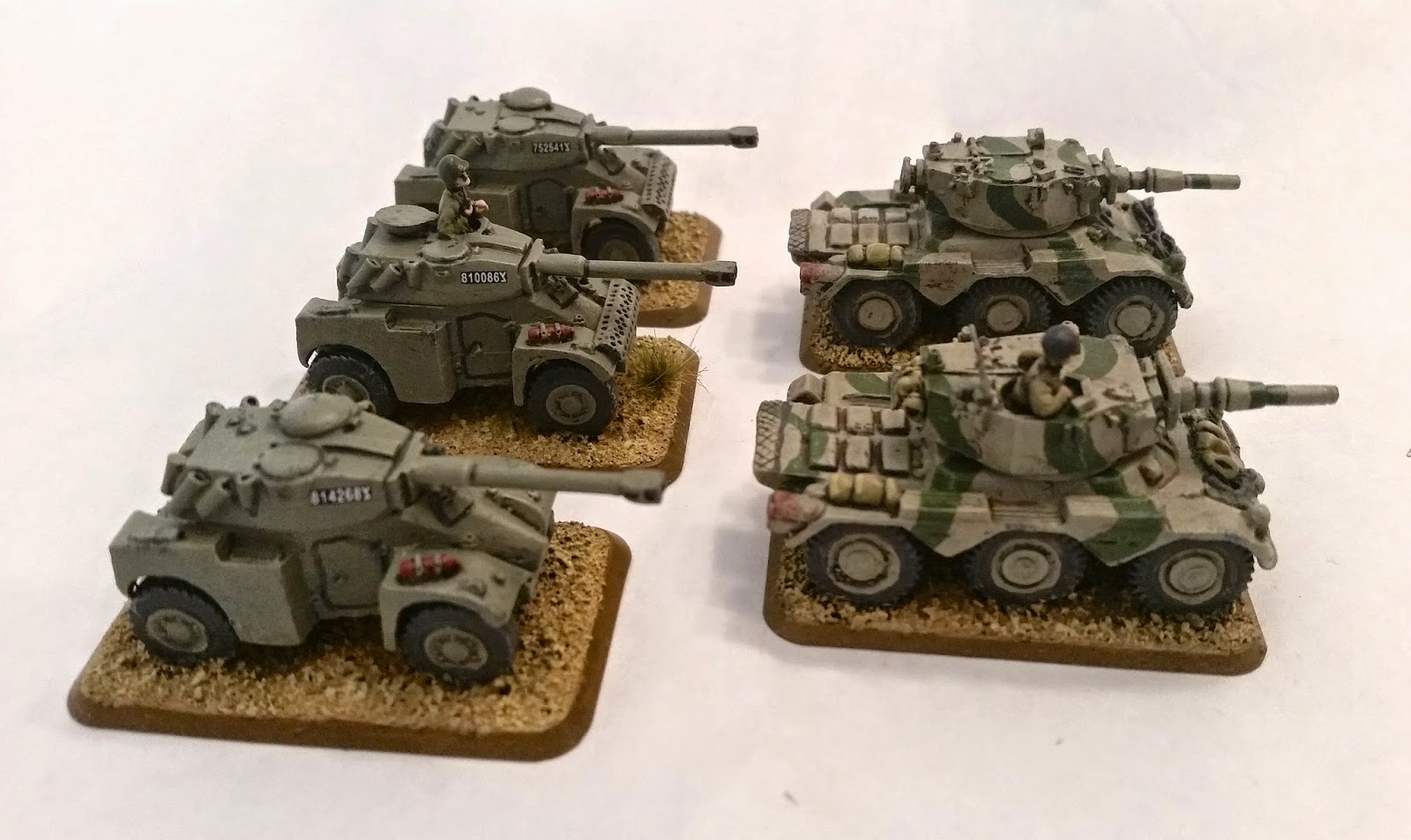 The Six-Day War saw four very different armies fight it out over very different terrain with very different equipment. The Israeli's used a mismatched force of French, British and American equipment, some decades old, the Egyptian with the newest and best Soviet equipment, the Jordanians with top of the line British and American vehicles and the Syrians with even old German WWII vehicles. Most of this can be found in the Fate of a Nation booklet for Flames of War, however many vehicles were left out of the book. I just can't help but add the odd vehicles that BF decided to leave out. You can find rules for these vehicles in my previous lists or check out the Flames of War forums where someone has posted rules for the overlooked options!

Two of the vehicles Battlefront has left out are the AML-90 and Saladin armored cars, I just couldn't miss out on these interesting vehicles.

The Alvis Saladin Armored Car was a British designed, six wheeled heavy armored car that was used by the Jordanians, whether or not any saw action in the Six-Day War is another matter. It had a powerful 76mm gun and a co-ax MG. The Israeli Armored Corps Museum at Latrun has a Saladin on display there that is listed as captured from Jordan in the Six-Day War. Also in several accounts, Jordanian armored cars are listed as being used by the armored brigades against PLO forces during Black September in 1970.

Anyway, for miniatures the only 15mm option I could find was by QRF, and after looking at the few pictures online I could find, I decided to modify them. The original turret seemed to look to short, almost squished down. Luckily Battlefront offer the same turret used on the Saladin on their M113 FSV, so I added that turret to the QRF hulls, and Voila! There was some work required to fit the turret to the hull, but nothing some cutting and magnets couldn't solve.

I currently have two Saladin's finished and will add one more Saladin and two Ferret Armored Cars based on and old TO&E I found of the Jordanian Armored Brigades in 1967. 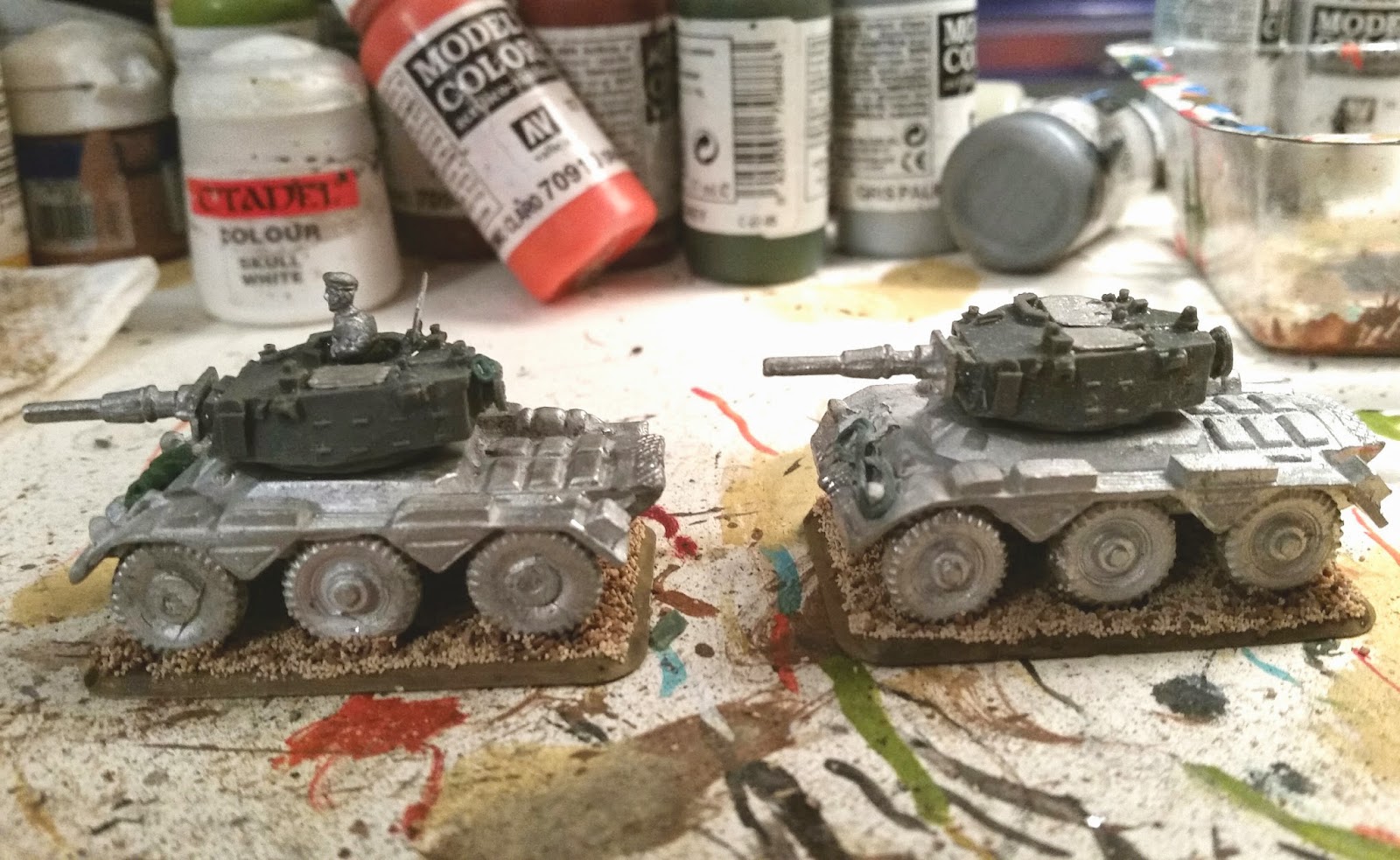 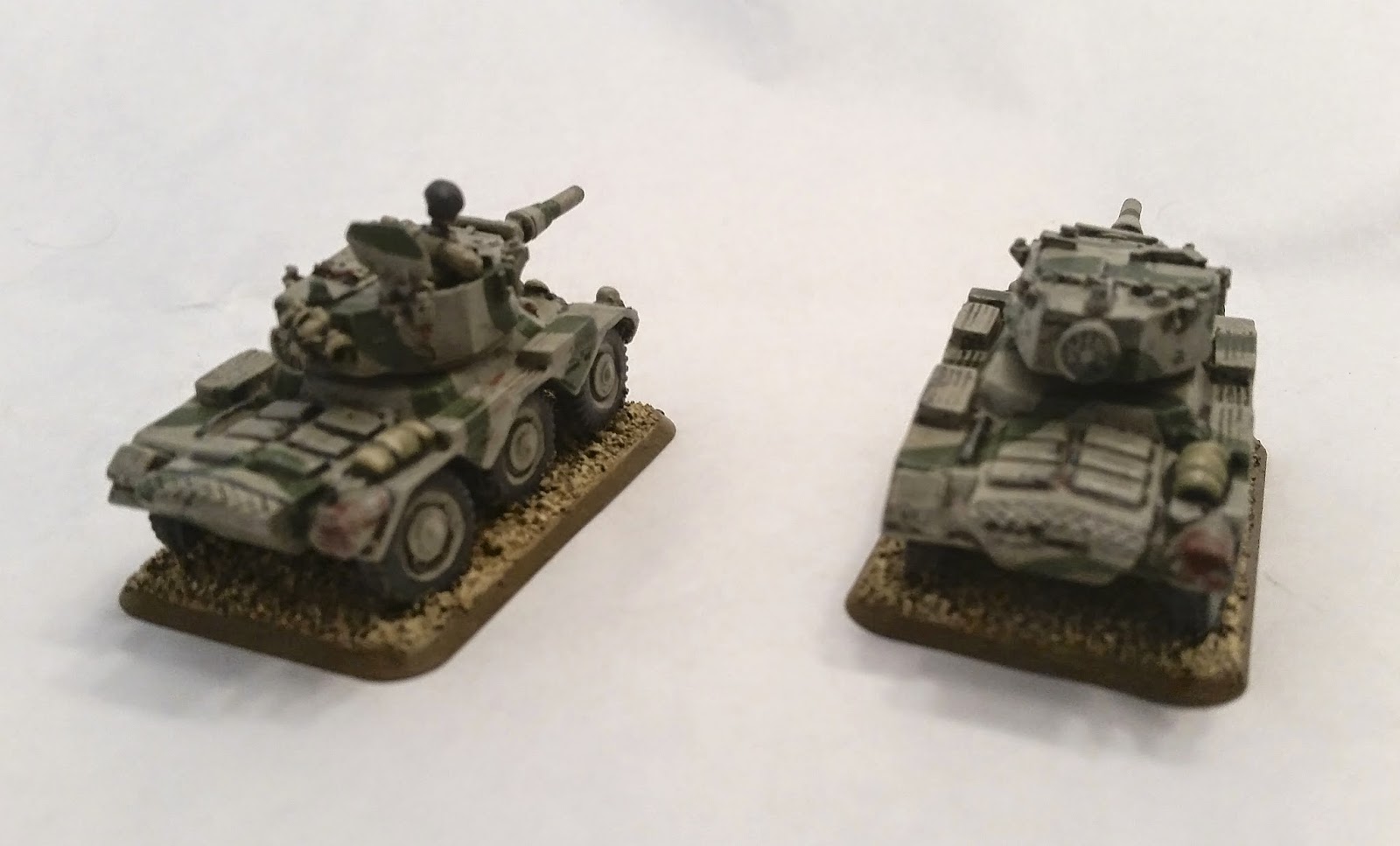 The next up is the Saladin's Israeli counterpart, the French made, Panhard AML-90. This armored car  had a very powerful, for an armored car, 90mm main gun and co-ax MG.

The armored cars however did see combat in the Six-Day War as part of the 41st Reconnaissance Company. These vehicles were crewed by paratroopers but fought north of Jerusalem with armored and mechanized forces. They also saw action following the war during the Battle of Karameh in 1968, where a couple were lost to the Jordanians, and were soon taken out of service. The Jordanian 60th Armored Brigade was at Karameh, so who knows, the AML-90's and Saladins may have meet in combat... I know I am stretching things there. :)

For the miniatures I went with Peter Pig AML-90's and they look great without any modification.


Here are some comparisons between the two, they seem to scale very well together, with the Saladin's being bigger and beefier. 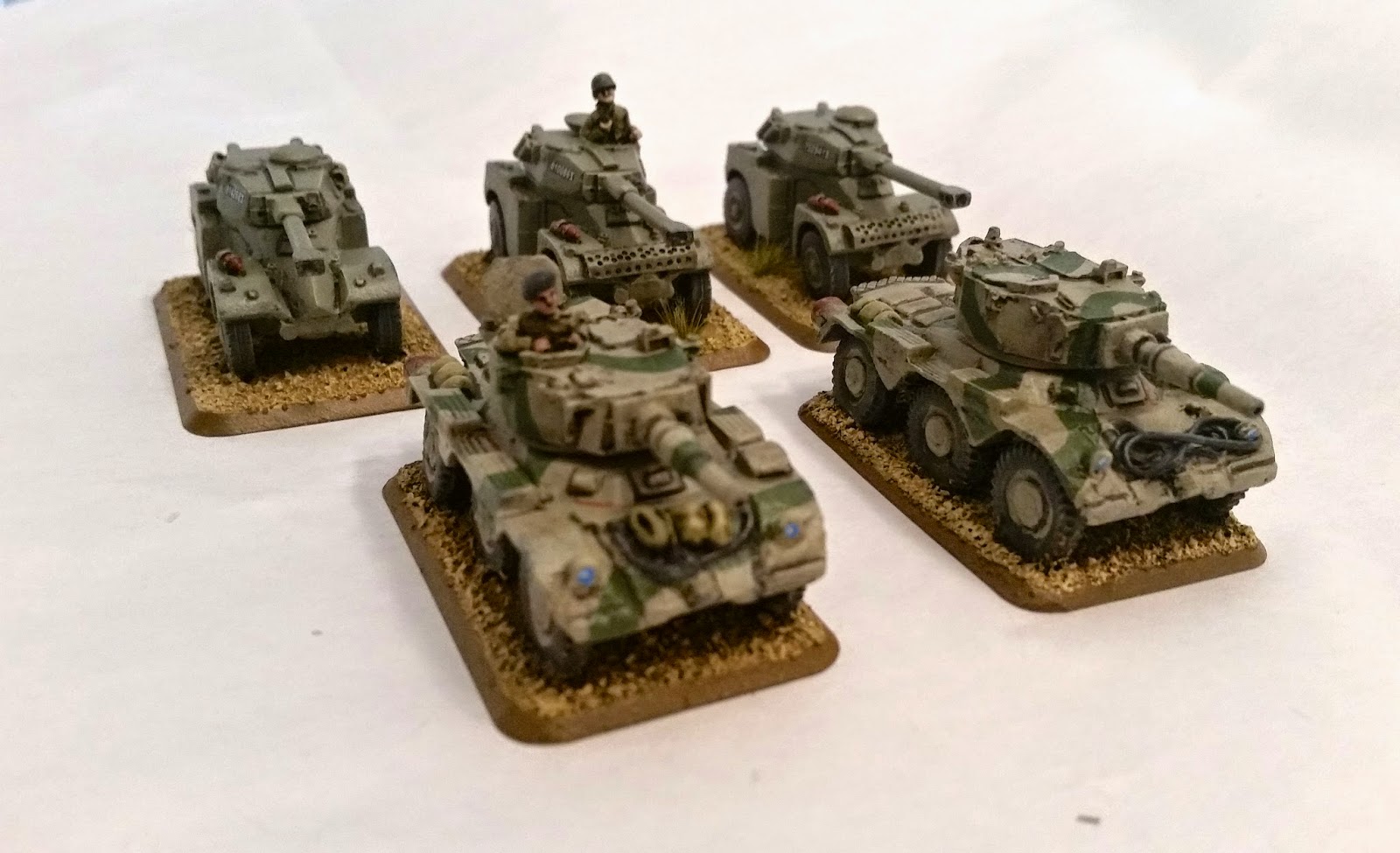 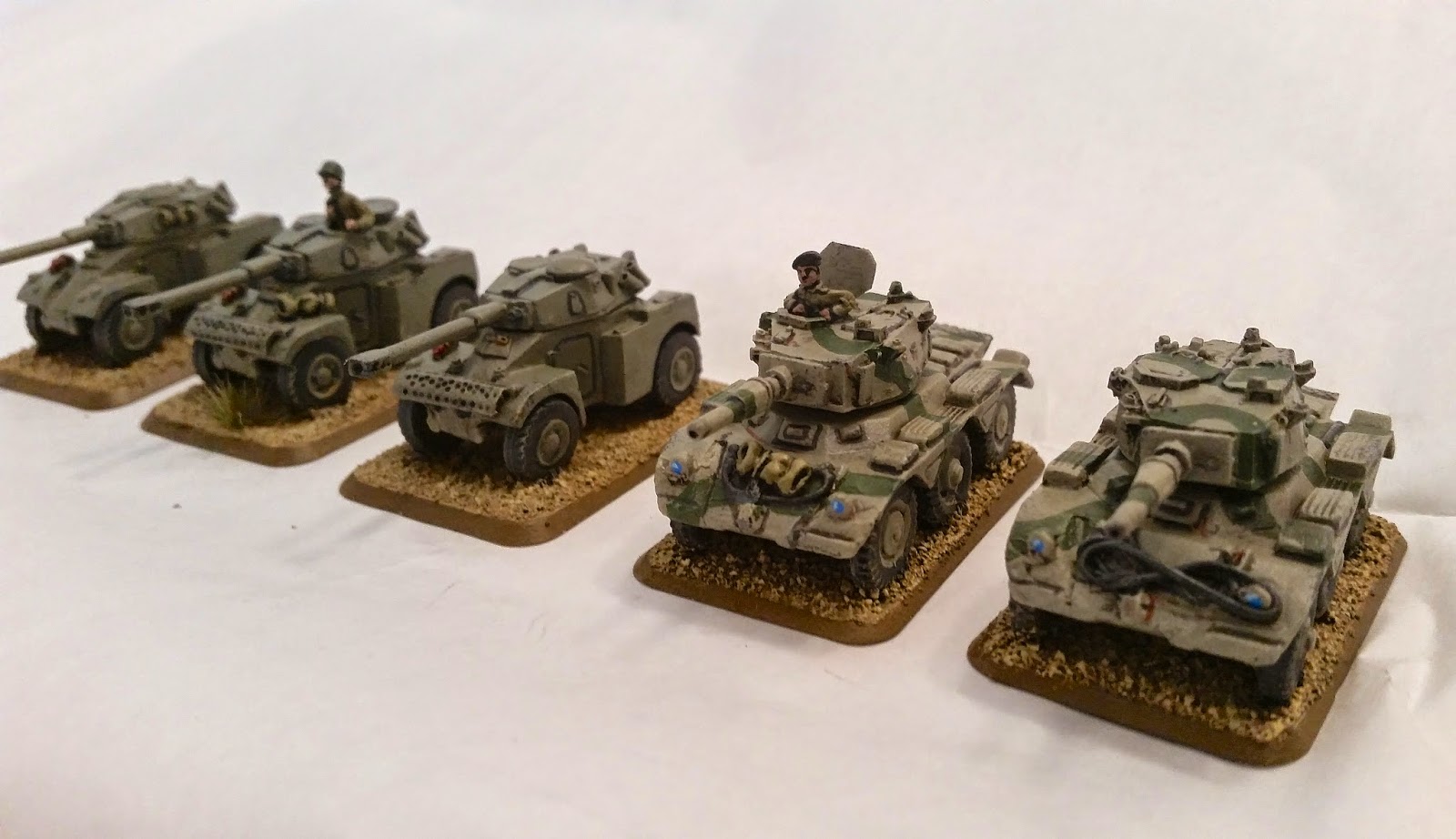 So next up on the painting table is the last Saladin, two Ferret armored cars, and M52 Self Propelled Artillery for the Jordanians. I would love M47 Patton's but I don't know of a company that makes 15mm versions that would be the scale anywhere close to BF's M48's... :(
Posted by Amroth at 7:23 PM 6 comments: