Welcome the the Jungle

Recently I picked up some of the FOW Vietnam range on sale at my local hobby shop. After finding out that new Vietnam books and miniatures were on the way from Battlefront I decided to get these guys out and paint them up. 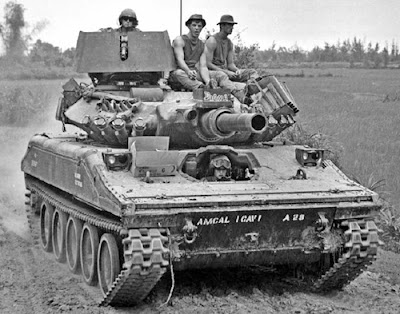 First up are three M551 Sheridan tanks. These tanks were light tanks to support airborne forces and could be brought in by plane. The first thing I noticed is the Sheridans are giant compared to most WWII tanks, probably because the turret was so large. The weight issue was addressed by making the hull aluminum, that certainly made it lighter but also vulnerable to almost every heavy weapon the enemy had. Here is a link to the Wikipedia article about the Sheridan.

Here is a preview of my M113 ACAV's or Armored Calvary Assault Vehicle. Which I think means, put as many machine guns as possible on them. The Battlefront M113 kit was a lot tougher to assemble compared to most of their miniatures, but I here in a month or two they are releasing an all plastic version of it, nice. Here is some info about the M113. 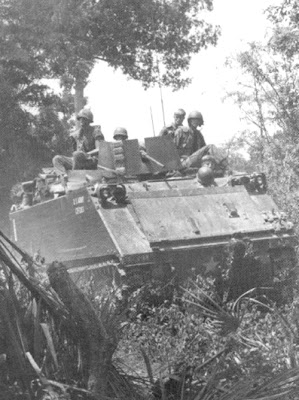 The first of my M113's, although when it is all said and done,  I'll likely have a dozen for my Armored Cav force. 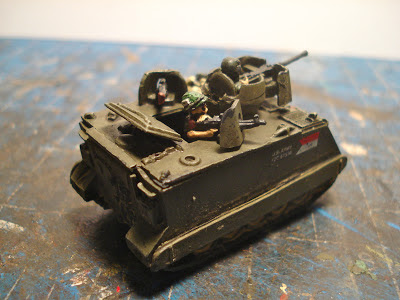 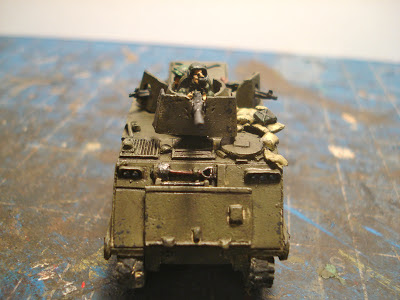 One of my favorite things about miniature wargaming is getting into a period of history that I am not as familiar with and learning all I can about it. The Vietnam War is one of those periods, so I've been reading online and ordering books from Amazon for a week now. Thanks Battlefront...

Email ThisBlogThis!Share to TwitterShare to FacebookShare to Pinterest
Labels: Vietnam

This is a batrep of my second game this weekend. My Volksgrenadiers faced off against their opponents from the new NUTS book, thanks Battlefront for naming one of your books... Nuts.
Well anyway, I was facing US paratroopers from the 101st Division in the Dust Up mission.
I used the same list that I used against the Soviets earlier in the day.

My opponent Matthew ran a Para list that had:

The table was also the same setup as before, but in Dust Up we deploy in quadrants.


Mathew chose his quadrant to attack from after winning the dice roll to do so. We then placed half our respective forces in delayed reserve. Below you can see our deployments.

I went first and dug in the heavy guns but failed for the infantry guns. He rolled air and killed a team in the building his artillery barrage failed to kill any teams, then it was back to me.

Second turn I ranged in on both his artillery and AT guns, I killed two 155s and one 57mm gun.


His air came in again and attacked the building and his artillery failed to unpin, I killed another 57mm with my infantry guns and ranged in on his 155s again but missed.


I received reserves on turn three and brought in the Jagdpanzers, they shot up his infantry and the inf guns dropped a template on them, a couple of casualties. My artillery brought is down to one gun, he received no reserves.


I rolled another platoon from reserve and brought in the pioneers, their flamethrowers and the Jagdpanzers killed several of the para platoon and one of the 57mm guns.
No reserves again for Matt, but he does kill a few pioneer teams that didn't make it into the woods.


A quick run down of this assault which was crazier than it should have been. I move my remaining four pioneers forward against the last three paras, my flamethrower killed one and pinned them, my assault rifles killed all of the 57mm platoon through shooting. Now in defensive fire his para command team and last LMG fire three times and hit three times against my last three pioneers, I then promptly roll three ones. His defensive fire killed all the pioneers. I then use shooting was to successful to move the sturm platoon into combat, he counterattacks with his command team and kills a team I come back and finally take out the platoon. Crazy.

I move the Sturm platoon towards his objective and kill a Sherman with artillery, the Jagds move up.
He finally gets all his reserves and one of his LMGs manages to kill one of my 152mm guns.

Jagdpanzer keep moving up and one is bailed by air. Infantry cross the river and take out the 155mm Howitzer commander and staff team, the last gun runs. He moves his CiC to contest, brings out a sniper and moves the Shermans over to fire, I lose four teams to four hits. His CiC is to far to contest so he assaults, survives defensive fire, kills a team and I fail to counter and must break off. I'm below half strength but manage to stay on.

The final turn sees the much reduced Sturm platoon take out the CiC and the Jagpanzers kill the Shermans. He is below half with no CiC or 2iC and his force runs.

This game turned out to be a nail biter, when I enveloped his two platoons earlier I thought it was over then, but the paras almost turned the tables on me.
Posted by Amroth at 9:45 AM 1 comment:

This weekend I played a FOW game against Rob's Engineer Sappers. We decided to play a infantry battle on a terrain heavy river board. Mainly because I have fallen in love with the new winter German infantry that Battlefront has put out.

My list was a 1780pt veteran Volksgrenadier Company it consisted of: 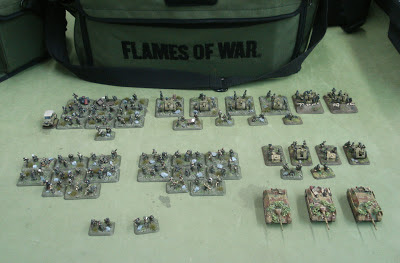 I do not like proxy units but I've waited on the Pak 50's for six months and wanted to play this list, as a side note I finally received my Pak 50s and just finished them, they're great.  Also I can't justify buying two boxes of the Soviet Reserve Artillery just to get the six 152mm guns I need for this list, since that seems to be one of the only artillery pieces that Battlefront doesn't sell individually. I emailed them last week and asked about that, and they told me there were no plans to release them individually. 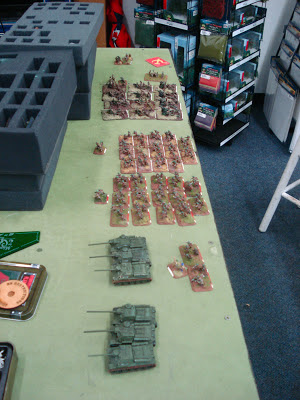 We rolled for Fighting Withdrawal and as Rob's Sappers always attack I was the defender. Here is the board and setup.

Robert initially tried to infiltrate across the river, but had to settle for infiltrating up to the river. My six gun battery was throwing out all the double wide templates I could. My Jadpanzers ambushed and knocked out one of his SU-85m platoons, the survivors fled.


In my third turn I foolishly withdraw my damaged pioneer platoon and shifted my full strength Schultzen platoon over towards the objective. I manage to pin both his assaults against my guns, his artillery had failed to range in on them so they fired full rate of fire, but had either of those assaults gotten through he would have won.


The next turn his assault was once again pinned down by defensive fire, and now my Schultzen platoon and Jagdpanzers were almost to the objective to help out. I withdrew another platoon from the far side of the board. I shot up much of the remaining Soviet infantry and my artillery continued to pounded them as well.

We called it then, with only three infantry stands on the objective, my guns still contesting and a full infantry platoon and two tanks on the way, he wasn't able to take either before I started removing them.
Posted by Amroth at 8:48 AM 2 comments: