Recently I met up with Michael before he left for the summer, and we got in a game of Flames of War Version 4. While thinking about what list to run, I ran across my old 21st Panzer Division in Normandy and the nostalgia got me! One of the big things that worried me about V4 are the new rules for platoon morale, so I wanted to use some small, fragile German platoons to test things out.

My 1750 point Beute StuG Batterie consisted of:
Mine is a very mobile force that can put out a lot of machine gun fire each turn, and while it has good anti tank capabilities, every vehicle is very fragile.

Michael was running a 1750 point 1st Infantry Division list form the Normandy book, which had:
The mission we played was Hasty Attack with me as the attacker. Michael left his tanks and TD's in delayed reserves and deployed his weapons platoon in ambush. He held off the armor since it was a large portion of his points so he could get more platoons on the board at the start. He then used his recon to move up his deployment zone forward and placed one of his infantry platoons in the buildings at the very center of the board, everything else was further back around the objectives.

I took a page from him and deployed my 8-Rad forward on my left and brought some panzergrenadiers and StuGs with them. 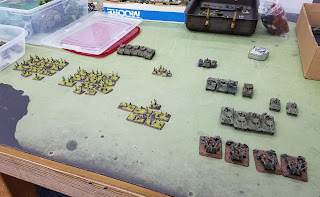 I was able to aggressively move up on the left flank on the first turn with my spearhead deployment. That gave me three platoons threatening the left most objective on the first turn, the rest of my force put pressure on this force in the center to keep it from moving over to support. 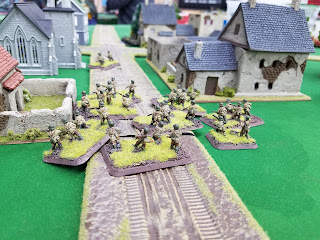 Michael revealed his ambush on the left objective to prevent me from capturing it! His M7 Priests hiding in the woods near the objective knocked out a few StuG's. In my turn I put lots of fire into his weapons platoon and then assaulted and they backed off.

The big V4 change that really caught me off guard is the change to Breakthrough guns. I put a great deal of fire into his infantry in the city with 8 vehicles with Breakthrough gun, with almost no effect. Infantry teams now just re-roll any successful infantry saves when hit by a gun with the Breakthrough rule, in the past they did not receive a save at all. Needless to say Michael saved all but two of eight hits, even re-rolling, and I then rolled a "1" for my firepower's with a 105mm StuH. This is a change I will really need to plan for, as I always tried to have a few Breakthrough guns in all my lists just to deal with infantry and guns, now I can't rely on them to do that.

I also failed to kill any of the trained Priests...

Latter turns saw his Priests kill both 8-Rads on the left his towed 105 bombardment killed another StuG and my Panzergrenadiers whittled down. However my firepower really began to tell in the center as I was able to gut his big infantry platoon there and harass his second infantry platoon as it moved over from the right flank. Also I finally took out a few of the Priests.

My main fear was his reserves, if they showed up now around the left objective I would be in real trouble.

The game ended with Michael not getting his reserves in on the 3rd or 4th turn, which allowed me to take the left objective and win the game!

Another really fun Flames of War Version 4 game. It is odd, but infantry and gun teams seem tough to deal with, even with lots of artillery. I know this is probably not the case, but it seemed like it in this game, which likely comes from my shock about the Breakthrough Gun rule. I knew of the change and was not surprised by it, but Michael did not seem to fail any of the re-rolls for his infantry and guns. I even hit his towed 105's with my StuH's later in the game and got two hits, he passed both gun saves and the re-roll, that would have been two dead gun teams in the past.

The new morale rules were not a huge factor as we both seemed to pass our checks this game, but I can see it being very frustrating if you role poorly in a game, especially with small, squishy platoons.

V4 is a much more mobile game. With infantry moving faster and the new orders, you can really cover some ground during the course of the game, I like that a lot!

So if summary a great game with lots of movement and drama. Michael not getting his delayed reserves really saved me as a platoon of Shermans behind me would have spelled almost certain doom. I just wish there were more players in the area these days.
Posted by Amroth at 8:59 AM 2 comments:


I wanted to post a few pictures of some recent models I have finished. I bought two M4A3 Sherman kits and a M5A1 Stuart. These are kits made by Rubicon Models and... spoiler alert they are great!

They kits are 1/56th scale or 28mm which is probably my new favorite model scale. I have really enjoyed the 1/48th scale tank models by Tamiya as I find 1/35th scale tank kits are bigger than I want. These are small enough to store easily but also large enough to show great detail.

I will do a full review on these later as well as the Empress Miniatures Late War US Infantry in the pictures.

Posted by Amroth at 8:48 AM No comments: