Israel takes on Jordan and Egypt, Fate of a Nation Game


A few weeks ago Matt, Rob and I were able to get together at the shop and play a massive Six Days War game for Flames of War. Mostly because Matt is still finishing his British Comets and I have been very busy with the Jordanians lately!

I used the surrounded mission from Flames of War with some slight alterations to represent a what if scenario from 1967. Historically, the Egyptian command had told the Jordanians that on the first day of the war they had smashed the IAF and were pushing up towards Israel from the south. The Jordanians began to move the 60th and 40th Armored Brigades south into Hebron to attack southward and link up with the Egyptian armored spearheads... The only problem was none of that had happened and the Egyptian Army in the Sinai was being rolled up. The 60th and 40th had to then scramble to get back towards Jerusalem and counter the Israeli attacks there, in the process they were attacked from the air by the undefeated IAF. But for our scenario, I had an Israeli force of Infantry being attacked by both the Egyptians and Jordanians while holding out for the Israeli armored to arrive.

The points totaled 4,435 points per side, and let me use some of my newest miniatures. In hindsight the Israelis could have been a little better maximized for taking on lots of heavily armored tanks and not just many cool units...

The Jordanians consisted of two companies; tank list with thirteen pattons (M47 and M48s), M42s, ferrets and saladins. Then a infantry company of two platoons, AT jeeps recoilless rifles and six 25 pdrs.

The Egyptians consisted of  a single battalion with eighteen T-55's, six IS-3's, six SU-100's, ZSU-57s, a scout platoon with PT-76's and a single platoon of mech infantry on foot.

The Israeli's were made up of two companies with the infantry force having; two full platoons, AT jeeps, 90mm Halftracks, a recon section with two halftracks, two 155mm SP guns, three Magach 2's and three M1 Shermans. The tank force was made up of ten M51 Ishermans, three Sho'ts, four AML-90's and three 120mm Mortar halftracks.


The first turns saw the Jordanians and Egyptians move aggressively forward towards the worried Israeli infantry. Shots were traded with little result. The Israeli Magach 2's had only the 90mm gun and couldn't rely on it to penetrate the front of the opposing IS-3's and T-55's. Few of the ten tank T-55 platoon vehicles were destroyed by the 106mm RR jeeps and 90mm Halftracks, but many were bailed. The 155mm artillery bailed and killed a few tanks before the Jordanian Pattons knocked them out from behind. Finally at point blank range the IS-3's and T-55's knocked out the Magach 2's.

The next few turns witnesses the slow erosion of the Israeli support platoons, artillery, 90mm Halftracks, recon and the outclassed M1 Shermans. One by one they fell victim to fire from the Jordanian Pattons and Egyptian tanks, with no where to hide or maneuver. All reserves for the Arav forces had arrived. The 106mm recoilless jeeps finally brought the ten tank T-55 platoon below half strength and it ran.

Turn three and four saw no reserves arrive for the Israelis, only on turn four did a single platoon of Sho'ts and the command roll on the board, but things were grim for the Israeli's. The infantry were holding on tight to the objectives, but the company was getting close to half strength.


The Sho'ts gutted the IS-3's when they came on but the HQ M51s missed both shots at the ZSU-57's with snake eyes. Return fire knocked both command tanks out. The last three Israeli recon jeeps rushed forward and knocked out all the 106mm AT guns with mg's but were destroyed by the nearby M47 Pattons, this meant the Israeli infantry company would be checking moral for the rest of the game.

Both platoons of M51's came on behind a M48 platoon and knocked it out, but fail to kill a single one of the other six from the front. The next turns sees five shermans knocked out by the pattons. The Sho'ts cannot move up as their flanks would be exposed to either the pattons or the hiding ZSU-57's, and side armor 6 will not help them any...

Then the Israeli infantry are pinned by shooting and assaulted by a platoon of Pattons and the seven strong T-55 platoon. They beat back both killing a T-55 and all three Pattons but are severely depleted. The surviving M51's knock out a couple of Pattons and the newly arrived AML-90's knock out a few more AT jeeps but the end has come and the Israeli infantry company fails its moral check and the re-roll and heads home. With six nearly fresh Arab platoons around the objective I call the game.

All in all it was a fun game, and I did make the lists, set up the board and modify the mission... I just couldn't have done a better job of giving the Jordanians and Egyptians the advantage and handicapping the Israeli's. The Israeli's had no room to maneuver and no cover, and were taking devastating fire from in front and behind with reserves slow to arrive. The Jordanian Pattons especially were effective re-rolling misses at long range.

The biggest handicap was me wanting to put my neat new toys out on the board, the 90mm Halftracks, Recon Jeep Platoon and M1 Shermans were almost entirely useless in the is kind of fight but all were newly finished and I had never used them.

But I couldn't help geeking out at how cool the game looked with all the unique vehicles fighting it out!


One tank that I found sadly missing from the Fate of a Nation book was the Jordanian M47 Patton Tanks. These tanks made up the 12th Independent Tank Regiment that fought against the Israeli's around Jenin north of Jerusalem. The survivors also fought with the 40th Armored Brigade in the area, combining M47 and M48 Pattons!

The only company I know that make a 15mm M47 tank is Quality Casting miniatures and I was concerned that they would be far smaller than the BF M48 Pattons I use. So late last year I thought, YOLO! I will sculpt my own M47 tanks. I have been modifying 15mm miniatures for years, I thought I can probably make a tank from scratch... I managed to make a rough turret out of greenstuff before being overwhelmed by how much work it would be, as I don't have a lot of experience casting resin. Also the hull was something I was worried about making as my plan was to modify a BF M26 tank. But all this work was shelved with just the rough turret thrown into my box of bits.

Fast forward to a few weeks ago when I posted my modified Saladin Armored Cars, I mentioned wishing there was a M47 Patton miniature. One of the readers, Conrad, mentioned that he was working on making his own M47's. He was working on a great M47 tank hull using various different kits, Roskopf, Roco and BF. They looked great! That got me fired up to get back to work on my own shelved project. 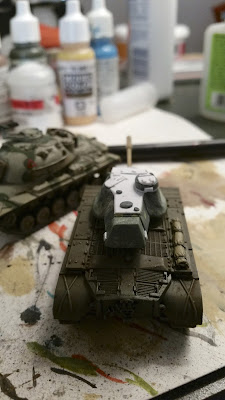 I used greenstuff and plasticard to shape the turret, and brass rod for the barrel. I made the first version with no dust cover over the mantlet, and no fuel can on the back or rails on the side of the turret. I then cast it and added all of those things to the second version and cast it as well. I was really happy with how they turned out!

My resin casting was a little rusty as I had to fill in a lot of air bubbles with greenstuff. 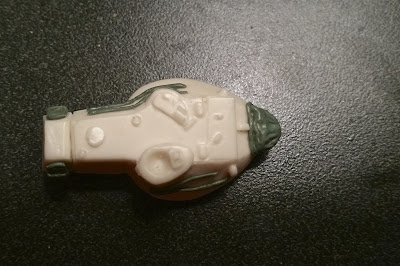 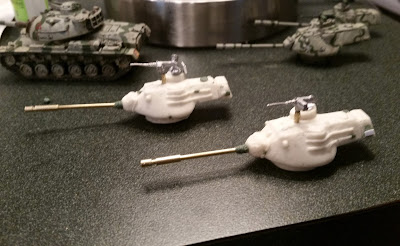 With the turrets done I wanted to stick with Conrad's combination hull, but was running into trouble finding a Roskopf/RMM miniature. So I went back to my old plan of modifying a BF M26 kit for the M47 hull, not ideal but I know myself and wanted to make sure I didn't lose interest again. Conrad's hull looks much better than mine. 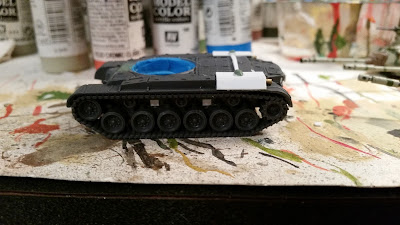 These are certainly not accurate by any fine scale modelers standard but they do look great on the tabletop and are the right size to go with the other Battlefront miniature I have in my Jordanian army.

None of this would have happened if someone hadn't read the blog and shared their excitement for this period of military history and their own projects.