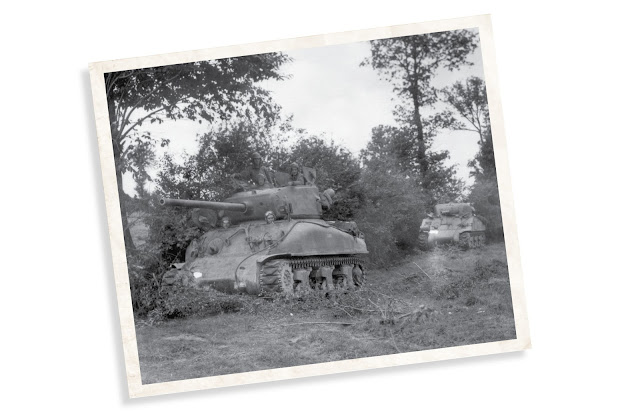 This weekend I was able to get in another game for the WWPD Operation Overlord Campaign. It was also a good opportunity for me to get my Americans out, they haven't seen the light of day in a while.
Unfortunately I didn't have the new Overlord book with me, just Devil's Charge.

So I fielded a US Cav Recon force.
My company had two understrength Cavalry Recon Patrols, one mounted, one dismounted.
A full M5 3in Gun Tank Destroyer Platoon with two bazooka. Three M5 Stuarts, a battery of three Priests and three M4A1 Shermans with one M4A1 76mm Shermans.


We rolled for Meeting Engagement as our mission with me as the attacker.


My recon forces moved up as I pushed hard for the right hand objective. 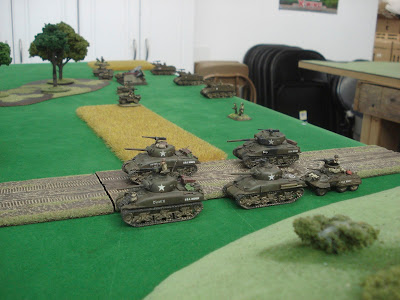 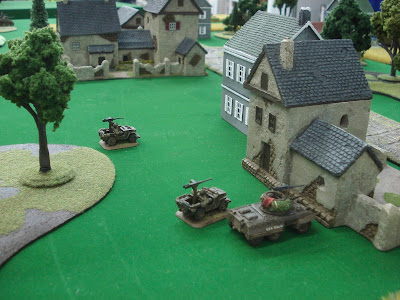 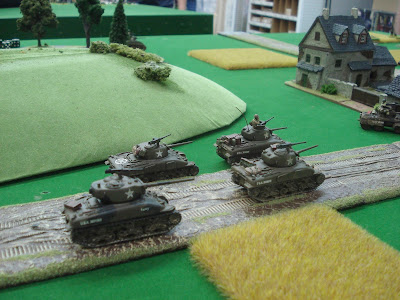 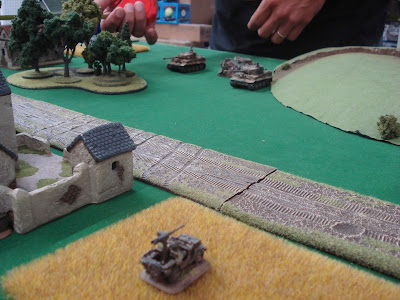 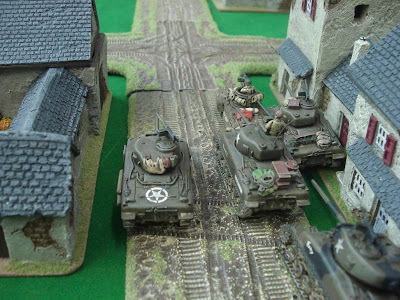 The bottom of the first turn Brandon moved the Tigers into the woods and advanced the Panzergrenadiers on the left.

The second turn saw the Sherman's rush through the village and MG a few grenadiers while the 76mm missed his shots at the Tiger.


The Tiger misses both shots at the Sherman 76. The 3in Guns don't miss with their ambush and burn the second Tiger but the 76mm misses his shots as do the rest of the Sherman's that surrounded it.
The Stuarts come on from reserve and push up towards the right objective. My Command Greyhound kills his 2iC and chases after the panzergrens on the left of the board.

The Germans receive a platoon of SS Grenadiers from reserve and the Tiger finally hits the Sherman 76, but doesn't pass the firepower. The Grenadiers on the left continue to push towards that American objective, it is only defended by the spotter, who can't stop them anyway.

The final turn saw the HQ Greyhound kill the last of the SS Grenadiers on the left after several turns of artillery pounding them. The Stuarts killed the last of the second SS Grenadier platoon. The 76mm Sherman hit the Tiger and the Sherman shorties hit three times from the side... the Tiger made all saves. But no reserves saw the Germans concede, 6-1 to the Cav Recon.
Posted by Amroth at 5:59 AM 1 comment: 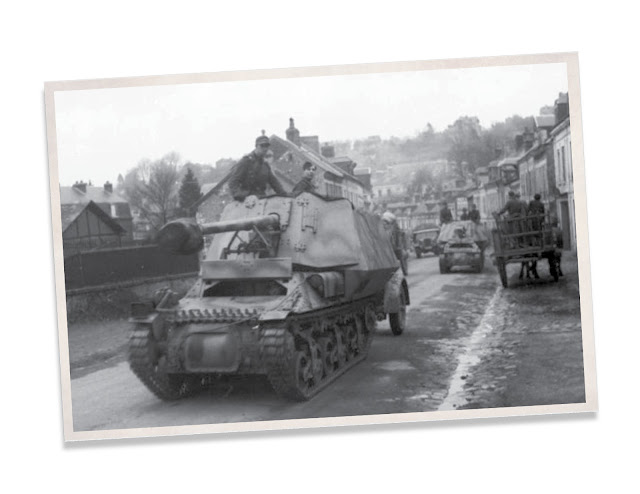 Matt and I have been pushing to get in a beach assault for the Operation Overlord campaign at WWPD. Because of busy schedules and a rush to finish up mini's for a beach assault we are just now getting the mission in, even though the beaches have already been taken in the campaign.

This is the first beach landing for Matt and me and took a long time to get set up. But was a lot of fun to play.


Matt spearheaded the invasion with his English 3rd Infantry Division.
His force consisted of; three infantry platoons, a commando platoon, assault pioneers, a breaching group, three crocodile flame tanks, an assault field battery and naval gunfire from a light cruiser. His force was around 1725 points.

I defended the beaches with a Festungskompanie from the 726 Infantry Division.
My force was a fortified platoon with a 7.5 cm FK pillbox, a Pak 40 pillbox, two HMG pillboxes, two HMG nests, a Pak 38 nest, and a 2cmm AA nest. Then two grenadier platoons, three Marder I's, a full French 155mm Artillery battery, four minefields and four barbed wire entanglements. I was right at 1500 points.


I set up the board with no real knowledge of how this mission works and in the end really messed myself up, :). I now know to leave room behind the seawall to place my obstacles, trench lines and plenty of room for my bunkers, haha.


Then on the horizon... invasion!

Luckily for me the breaching group in the first wave missed the beach and had to come in with a later wave. So the assault engineers, a infantry platoon and the commandos hit the beach.

The preliminary bombardment had my entire force pinned, but I had only lost a few teams. Matt's initial assaults were stopped by the HMG bunkers, although the Veteran Commandos almost got through.


I then unpinned most of my platoons and raked the beaches with MG42 fire. The British infantry platoon was wiped out by the artillery and HMGs. The next turn Matt received no reinforcements and the infantry hunkered down on the beach waiting for the tanks to arrive. And the next turn, arrive they did! The breaching group is here... to breach.


The tanks moved up, none bogging. At this point I definitely made a mistake, I thought the ARVE's were awkward layout, and we didn't check it. Turns out they can't move and shoot at obstacles, but could have gotten a shot off at the HMG pillbox. Shooting from the Shermans was ineffective and the Commandos were beaten back, the Engineers used their flamethrower, but were pinned by defensive fire as well. 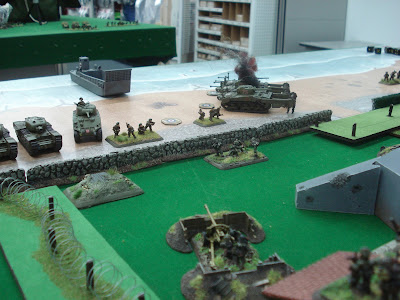 In my turn I wiped out the pioneers and took the commandos down to two stands. The bunkers and artillery killed a flail and bailed the others. Both platoons stayed on the board.


Matt then destroyed a section of the seawall and a HMG bunker with the ARVE's. The commando's were finally able to get into the trenches although they were knocked down to one stand. In my turn I took out one ARVE and destroyed all the Sherman flails.

It was at this point that we had to pack up since we were playing after work and it was getting late. It was the start of turn five and things could have went either way. The seawall was breached and Matt would be guaranteed to receive at least one platoon on his next turn, but it was a long way to go to the objectives.

All in all a really fun game, but our unfamiliarity with the mission keep us from finishing it, we will fight another beach landing in the future.
Posted by Amroth at 9:48 AM 1 comment:

English parachute forces believed to be moving around Caen from the south west. Contact with friendly forces holding the Rue de Caligrry near St. Manvieu-Norrey has been lost.

Move forces from Panzer-Grenadier-Regiment 192 to area. Seek out any enemy forces and insure the free passage of German forces on the Rue de Caligrry road and nearby rail line.

Strength and composition of enemy forces unknown. Sturmgeschütz from Sturmgeschütz-Abteilung 200 will be allocated to deal with enemy strong-points. 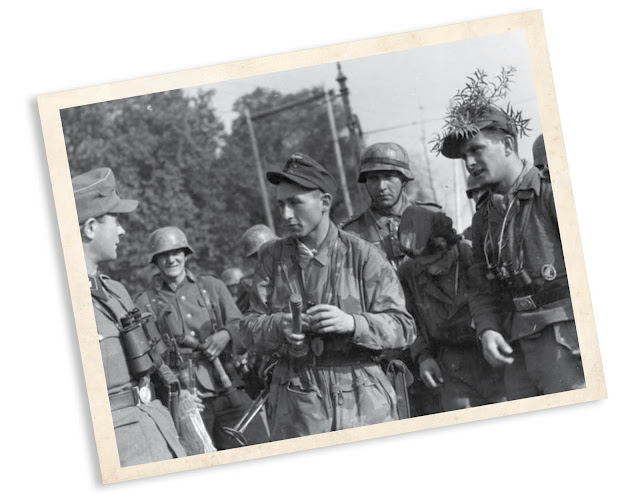 Matt and I were able to get in a FOW game for Operation Overlord this week. I brought my trusty 21. Panzer Division and Matt, his 6th Airborne. We played a game around Caen at 1200points. The mission was hold the line and I was the attacker. 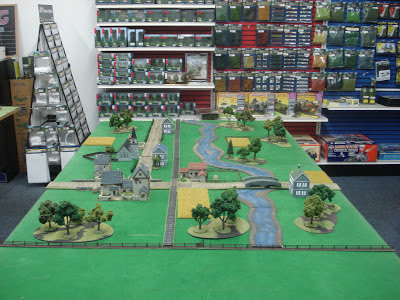 Matt was defending so he placed the 6pders in ambush with the mortars and a para platoon on the board. I focused on the village side of the river, and pushed all my forces down the main road. 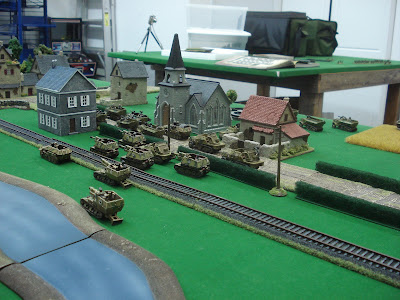 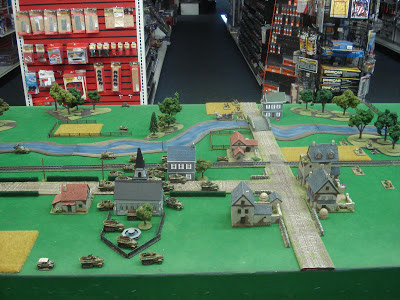 At this point I missed a few pictures, but the first panzer grenadier platoon assaulted the British CiC in the building by the objective. He kills one attacker with defensive fire, the Germans get no hits, the para team counterattacks and kills a team and ther grenadiers break off.


At the start of the British turn 5 with only one platoon on the board and two destroyed the Paras promptly rolled a 1 for company morale and ran.  In the end it was a 5-2 to the Germans. The Six pounders took out the 105mm 39H's which are absolute death against infantry. The Para platoon holding the second objective was pinned in place by a constant barrage from the Vielfachwerfer's and would have needed to cross a lot of open terrain to get at the other objective.

In hindsight the six pounder ambush was probably a little early and the lack of reserves for two turns sealed the deal for the 6th Airborne.