This weekend I played in an X-Wing Tournament at the shop, but afterwards we were able to get one last game of Flame of War for the Six Day War in, with my rules, before Battlefront releases its new booklet. It was a 1500 point game of fighting withdraw, with the Israeli's defending. 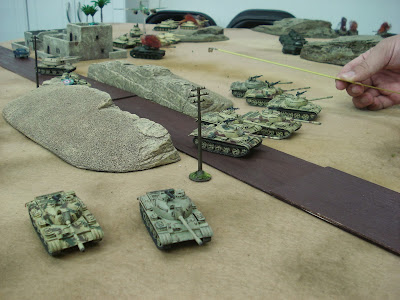 The Egyptian force consisted of:

The defending Israeli's were:

Joel played the Egyptians, Mathew played the Israeli's and I helped them both out, since neither had played any Arab Israeli Wars FOW.


I think early on I should have let Mathew know that the M50's would have a lot of trouble dealing with the T-55's from the front. He placed the AMX's in ambush.


The first turn saw the entire Egyptian force move up and take out 1 Patton, 1 M50 and 1 M51. Not a good start for the Israeli's.

The Israeli's return fire is largely ineffective. With semi indirect fire they hit with almost every shot. But the M50's can only bail at best and Joel rolled very well for armor saves from the bigger guns. In the end the pattons killed one T-55, the M51's killed one T-55 and Air killed two and bailed three T-34's.


Joel continued to push up the Egyptians aggressively and was rewarded by killing the remaining M51's and another M50. Mathew knocked out another T-55 with the Pattons and bailed a few more, but it looked like he couldn't stop the Egyptian juggernaut. Air snuck through and killed another couple of T-34's.

With that it is a 6-1 Victory to the Egyptians.

Mathew was making a list mainly based on what miniatures I had finished so that many M50 Shermans verses a horde of T-55's is certainly not ideal. He is already eying an Israeli Centurion list.

Having been so busy at work lately I haven't had much time to play or work on anything, but watching this game has gotten me fired up for AIW FOW again. I have several boxes of BF's new M51's preordered and think I will pick up the Magach box as well.

Also Khurasan Miniatures has finally got their Yom Kippur War line going and will have a ton of miniatures that can work for the Six Day War as well, link to their stuff HERE. They will be a great way to add individual tanks to your list, since BF currently only has them in boxes. They will be producing almost everything you need, eventually.

So between Battlefront and Khurasan, all the tanks used in the later AIW's should be produced in amazing quality, Yeehaw! 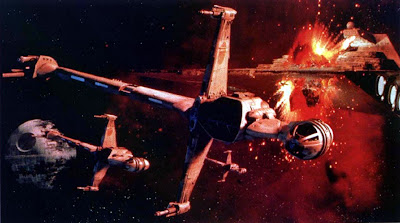 Well, I've been traveling for work lately and haven't had much time to do much gaming. But I did have just enough time on Saturday to get a game of X-wing in with the new miniatures.

Bryan and I wanted to try out the new bombers, so I brought the rebels with B-wings  and Horton Salm. Bryan pulled in a couple of TIE Bombers to back up his Firespray.


The first round saw both of us move in on each other, but were still out of range. I move straight in, hoping on the firepower of the B-wings to clear the way. The second round had the Dagger Squadron B-wing shot up and lose its shields, but the rebels killed Captain Jonus. 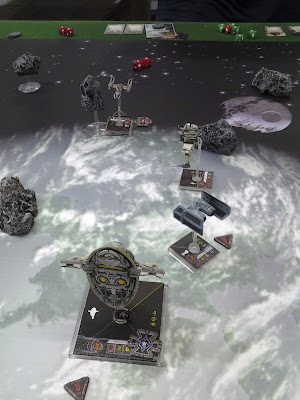 The next round saw me make a huge mistake, Horton flipped around to face the Imperials but ended up overlapping an asteroid, keeping him from firing. He took a ton of fire and was badly damaged.
I didn't get a photo of the next round but Horton damaged the Firespray, and the Blue Squadron B-wing destroyed the TIE Bomber, but since it was the same skill level, the TIE was still able to fire. It hit Horton with its last cluster missile and five of six attacks hit, BOOM no more Horton.

That left just the damaged Firespray and the Blue Squadron B-wing. For the next few turns the chase was on... however I learned that the B-wing has the worst maneuver dial in the game, and the Firespray ran circles around it.

It was frustrating not being able to make really any turns without stressing the pilot, and Bryan maneuvered well. In the end the B-wing was knocked out by missiles from the Firespray.
Fun game with the new ships.
Posted by Amroth at 8:33 AM No comments:

Volksgrenadiers vs US Armor (FOW)

I haven't had much time lately to do any gaming, with all the students returning to the university and moving to a new apartment. But I did manage to find some pictures of a game I played a few weeks ago against US Armor. We were playing a 1750 pt game, the mission was Breakthrough.

My opponent Dustin, was fielding a Confident Veteran tank company with: 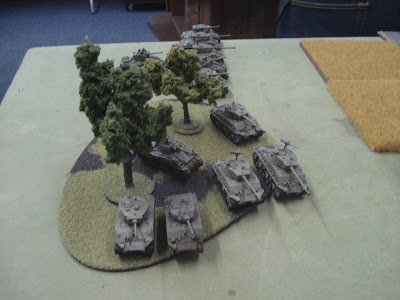 My Volksgrenadier were Confident Veteran and consisted of; 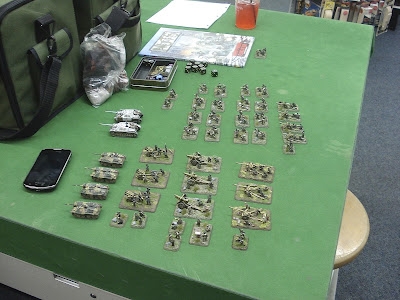 I was the defender, being an infantry company. This mission is tough since the defender doesn't even start in the quadrant with the objective you need to defend. David had the tank destroyers in flank attack. My Hetzers were in delayed reserve. 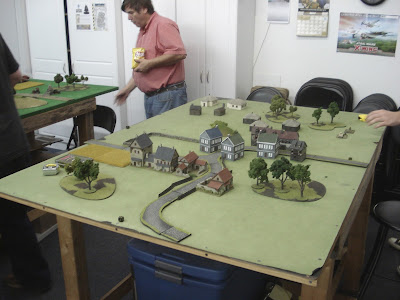 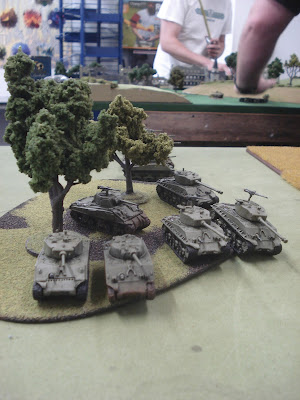 The first turn he moved one platoon down to deal with my Nebs and Paks and the other forward to engage my howitzers. The Pak40's survived all the fire at the bottom of the board, but the 15.2 artillery lost a gun even being gone to ground. 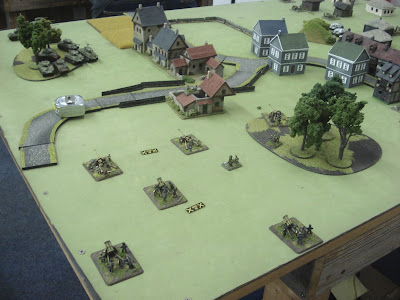 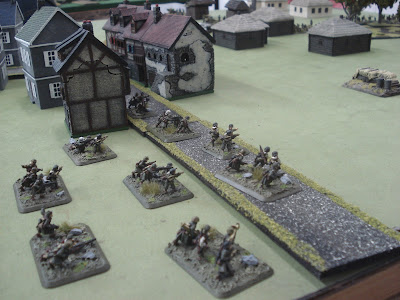 Davids next turn saw the Sherman platoon move out of the woods towards the Pak40's, but he couldn't get behind them. They did kill one pak40 on the move, the other Sherman platoon killed another 15.2mm gun. 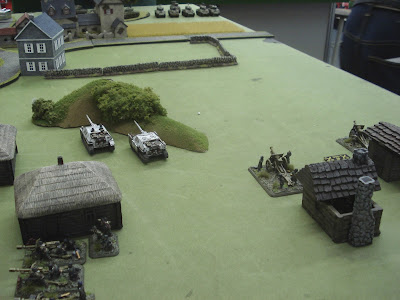 In my turn two, the Pak40's killed another Ez8 and the 105mm Sherman, but the platoon stayed. The Nebs and last 15.2 managed to kill a sherman from the platoon at the top of the board. My Volks platoons and  Pak50's finally got to the objectives.

After this I forgot to take any more pictures.

In David's turn three his bailed sherman with the jumbo once again failed to remount, the Jumbo missed its shots at the Paks. The sherman platoon at the top of the board moved into the village and killed the last 15.2mm gun, which then ran. No reserves.

In my turn three the Hetzers came on to the board. The Paks killed the bailed sherman and the Jumbo ran. The Pak50's and one of the Volks platoons managed to dig in around the objective.

In Davids turn four the M10's came on from the flank, but were hemmed in by the infantry and couldn't get around them without assaulting. He choose to fire at the Pak50's and killed one. The last sherman platoon moved into the village in the center, but had the Hetzers and Jagdpanzers on each flank so moved slowly. On the move they bailed a Hetzer.

During my turn four, I  moved the last two Pak40s to get side shots on the shermans if they moved past them. The Hetzers managed to kill a sherman with a flank shot, the Jagd's moved up to surround the Shermans. The Pak50's killed a couple of M10's  the grenadiers then assaulted, got through defensive fire and killed the rest. With that the US failed moral and ran.

Posted by Amroth at 8:01 AM No comments: