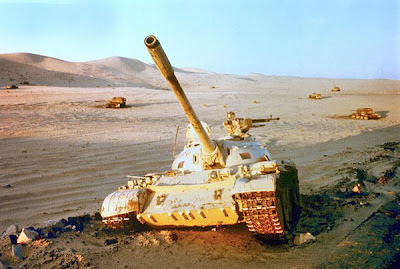 The following are just some test shots to keep me interested as I finish up the last of my Israeli Shermans and while waiting on BF to finish releasing the Vietnam stuff I need (BTR-50s, ZSU-57s). The army lists for the Six Day War are currently  being proof read, and boy did they need a lot of corrections. I intend to put them up in April and get everyone's help fixing any inaccuracies, especially in platoon and company organization.

If anyone wants to read over the pdfs and give me feedback before I put them online just let me know (check my profile).

And if you are interested in FOW rules for the Yom Kippur War go to this BLOG by NDC Wargames. Finding their blog really motivated me to get to work on rules for the 1967 Six Day War.

Wedge to the Last (XWG)

I recently played a game of the X-wing Miniature game at the shop, it was my first time trying out the wave 2 ships. I am a big fan of the TIE Interceptor from the Rogue Squadron book so I wanted to get them into action quickly.

But before I get into the after action report you should watch this video the get into the spirit of the game.

I was playing against Bryan and his 4 ship elite rebel force. We decided on a 150 point game. His force consisted of Dutch Vander, Horton Salm, Luke Skywalker and Wedge Antilles. They all had torpedoes and plenty of other tricks. I went with mostly named TIEs and Vader had homing missiles and swarm tactics, also one of the TIEs had marksmanship.

Here are a few newly painted tanks for my Israeli forces. One thing I have to get used to is that the Israeli tank markings were painted on free hand with brushes, so me painting them on by hand looks authentic.


Today I should have a large order arriving from Quality Castings with enough Shermans to finish out the company, a few 106mm Jeeps and the rest of the AMX-13 tanks. I have really gotten hooked on AIW miniatures.
Posted by Amroth at 7:26 AM No comments:

Before I get to the T-55's I wanted to show that I have made progress on my lists for Flames of War during the Six Day War. I have finished the Jordanian list, that only leaves the Syrians. Once they are ready I will put them online and get everyone's feedback, I'm sure there are many things about them that need to be changed. Of course these are completely unofficial but they should be a lot of fun, and I will brag and say they look really nice.


Now on to the tanks. These are Battlefronts new T-54s for the Vietnam range and as often as I say it, they are great. These miniatures had little flash and the parts fit very well, even the small fiddly bits like the mudguards.


While I'm making these primarily for the Six Day War in 1967, I couldn't help but add camouflage which wasn't used until after the war, oh well. The T-55's in 1967 were an overall sand color with no markings, and I will likely paint my second batch up like that. While looking for references online as to what camo patterns to use I found out that by the Yom Kippur war practically no two T-55's were painted in the same scheme or the same color. Now that's what I'm talking about since I love variety in my force.

Here are some comparisons with a M48 Patton tank, which is a monster compared with the T-55. I think it clearly illustrates how cramped it must have been in a T-55. 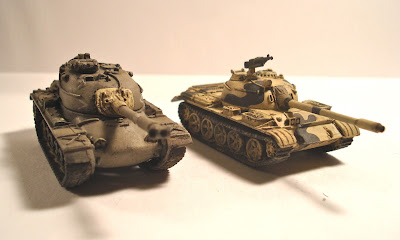 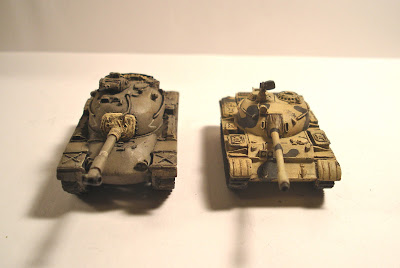 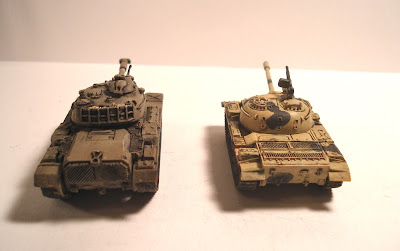 Thanks for looking and stay tuned for some images of my growing Israeli tank force for FOW.
Posted by Amroth at 7:58 AM No comments: