Everything has changed! 3D Printing 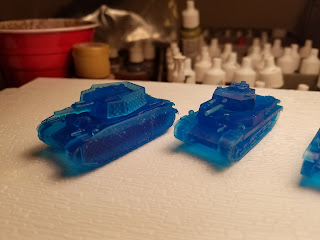 To start off with, I am well aware of 3D printers and what they can do, I am in the Industrial and Graphic Design department at work so I see 3D printers at work daily. But somewhere in the last year or so I missed the excellent SLA printers becoming so much cheaper (I mean relatively speaking, as they are still pricey).

However a friend of mine, Ray, recently mentioned that he had been printing some amazing 3D models and while I was somewhat skeptical, I couldn't resist when he offered to print me a few as a test. I have purchased 3D printed miniatures in the past from ebay and also shapeways. The results were always fine, but the print lines really take away from the detail on such small miniatures (10mm to 15mm). Also some of the material had proven difficult to clean and have paint adhere to.

Ray sent me a list of tanks to choose from and I had him print me some Hungarian tanks in 15mm. The list was from Thingiverse, a place where you can download free 3D files for about everything under the sun, and as fate would have it, someone had put together a huge collection of WWII vehicles.

Ray is using a Formlabs Form II 3D printer, which shoots a laser into a vat of liquid resin to harden it. It almost appears as if the printer is pulling your model out a vat of liquid. Here is a neat video review that shows the process!

Fast forward a week and Ray brings me two Turan tanks and two Toldi tanks, that are amazing! You can see them below. There were no visible print lines even in 1:100th scale and the resin is tough and light. The barrels were not warped and are just a strong as any plastic. This resin is not brittle at all, as a matter of fact you really can't tell that the miniatures are not plastic once they are printed. The blue material that this first batch are made of is a strong dental resin so are nearly unbreakable, yet still clean up easily with a hobby knife.

That does bring me to one big point, there is a lot of clean up with these printed tanks. More on that in my second post.

So after this first batch of tanks I was hooked! Just imagine a print on demand catalog of nearly every tank and vehicle you can imagine. I talked with Ray and agreed to buy a container of resin material and he would print tanks for me, the container is around $150 US dollars but with that he is able to print around 100 tanks, depending on the size of the vehicles! I bought a slightly cheaper grey resin that holds detail at an amazing level.

So far I've had Ray print everything I needed to finish my early war German tank force (10 Panzer 38t, 4 Panzer IV's), then 10 French FCM 36 tanks, some late war Japanese tanks (see below), and the great thing is I can pick and choose. For example I've been able to buy some French Char D2 tank miniatures online, but the turrets are pretty bad. What I did was just grabbed a file for the Somua S35 turret from Thingiverse and added a peg in a 3D program I have, then Ray printed just the turret and now I have the perfect D2's I wanted!


For my next post I'll cover some more of the miniatures I've finished and go over the cleanup process to get the miniature ready to print.
Posted by Amroth at 12:05 PM 7 comments:

Email ThisBlogThis!Share to TwitterShare to FacebookShare to Pinterest
Labels: Miscellaneous

This is the second post about French tanks in WWII.  These posts will cover tanks and units that are not included in the Flames of War Blitzkrieg book and are intended to supplement it. For each tank and unit I will post a history article and finally a modeling article to go along with the new FOW lists.

By the 1930's it became apparent to all of Europe that Germany was no longer following the military restrictions put in place by the Treaty of Versailles, and was rebuilding its powerful military. French tank development following the end of WWI had been very limited and the majority of its tank force was made up of the outdated FT series of tanks. The Renault D1 tank was designed and built from the late 1920's till the early 1930's as a light tank replacement for the FT series, but by the time of its production France was aware that it too, was not suitable for the modern battlefield. France's own 25mm Hotchkiss anti tank gun could penetrate the D1's 30mm of maximum armor, and they knew that Germany had the 3.7mm Pak 36 which could do the same. Also the D1 could not handle a larger turret or a more powerful gun. Even before the D1 was being produced, its successor was in the works, what would become the Renault Char D2.

The Char D2 had 40mm of armor all around and the more modern APX-1 cast turret, the gun would first be the 47mm SA34 gun, based on a naval gun. While the Char D1 had been planned as a light tank from the get go, the D2 was intended to be a heavier vehicle from the start. Several engines were proposed but in the end a gasoline engine was selected to power the tank. There would be a 3-man crew with the commander in the turret and a driver and radio operator in the hull. The tank had two Reibel 7.5mm machine guns, one in the turret and one in the hull.

Another modern feature on the Char D2 was the addition of a radio in every tank. Each tank contained a rather fragile ER52 radio which could transmit and receive in Morse code, in addition the section command tank contained an additional ER51 radio that could transmit and receive voice signals. The command tanks had an additional antenna on the front left side of the tank. These early tank radios were quite fragile and difficult to operate in the field so the communication network did not function as well in reality as had been hoped.


Both the Char D2 and the larger Char B1 were approved at the same time, but were intended for different roles. The Char D2 was seen as a replacement for the FT and D1 tanks, but was not really a light tank. The Char B1 would be a battle tank to breach enemy lines. However, one reason that the Char D2 continued to be worked on at the same time as the massive Char B1 was that France thought that there could be armament restrictions that would prevent a 28 ton tank, like the Char B1, from being produced. The French Army realized if they could not make the Char B1 then the D2 would be the closest practical substitute. In the end no plan on restricting the maximum weight of tanks was adopted and the D2 found itself in a strange position of being too large for a light tank but too small for a battle tank.

The first batch of 50 Char D2's were delivered from 1935 to 1937 and were the most modern tanks the French army had at the time. These were sent to the 507th RCC commanded by Colonel Charles de Gaulle, and the unit developed a strong esprit de corps. The tanks of the 507th would be used heavily over the next few years, so by 1940 they were badly worn out. It is was also noted in the winter of 1939 that the Char D2 performed very badly in frozen icy conditions, having great difficultly keeping traction on slippery roads.

In 1938 the 507th would begin to upgrade the older tanks to the APX-4 turret with the 47mm SA35 gun, this was still in process as war broke out. The 47mm SA35 gun had very good anti tank capabilities, able to penetrate the armor of any German tank of the time. Another benefit was the sights on the gun gave x4 magnification which was superior to the German sights on the Panzer III and IV of the time, allowing the French tanks to engage at longer ranges. There would be a second order of 50 Char D2's and a least 37 of them were delivered to units before the Armistice was signed, these tanks would supplement the existing tanks. All of the 2nd batch of tanks would have the better gun and other slight improvements. Three independent tank companies would receive these new tanks with two of those companies being attached to the 19th BCC (formerly the 507th RCC).However, the condition of the original first batch of tanks was very poor in 1940 and there was an overall lack of spare parts for all the tanks, this meant that the actual number of combat ready tanks at any given time was very low.

I will cover more about the Char D2 in combat in the next post, but in combat they were shown to have good mobility, good armor protection and a good gun (SA35). The Char D2 was entirely immune to the machineguns and 20mm cannons of the Panzer I's and II's that made up the bulk of German tanks in 1940. The 36mm Pak 36 mounted on the Panzer III was of little use except at very close range and then mostly from the sides. The German Panzer IV, a heavy tank for the time, had better luck with its 75mm L24 gun, but it too would need to close to short range to have success. The German tankers realized this very quickly and were often able to close with the French tanks and engage them individually at short range since the French tanks were often in combat with no support from infantry or AT guns.

I am not a historian by any stretch, I just wanted to compile some concise information about French tanks during 1940. If you want to know more I'd recommend some of the books below, especially the "Trackstory" series if you want to learn more about specific tanks.

Posted by Amroth at 6:58 AM No comments: