I am posting this even though I'm still waiting on a few 3D printed T-72B3 tanks and the new Battlefront T-72B box. I will make another comparison when they are finished. 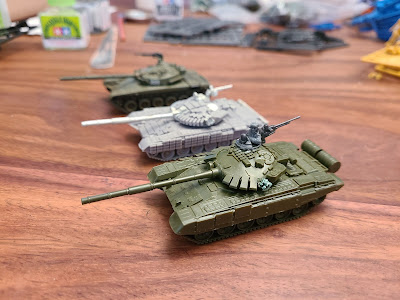 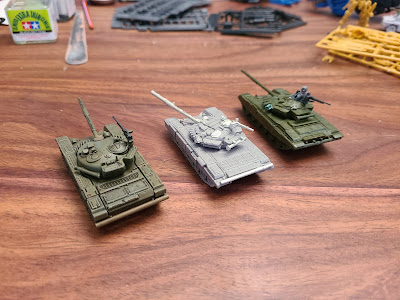 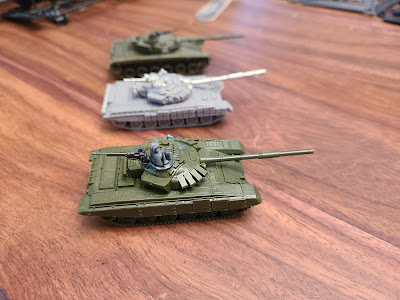 All of these tank miniatures have their pros and cons but overall they are each really great!  What you can, hopefully, see in the pictures is that each of these three tanks, from different manufactures, scale nicely together! The hulls on each are nearly the same length and height. The turrets on the Khurasan and Zvezda tanks are the same size but the Battlefront turret is a little bigger all around, (just like with its T-64 I've recently reviewed). Detail on each is very good and the assembly for all of them is quick. 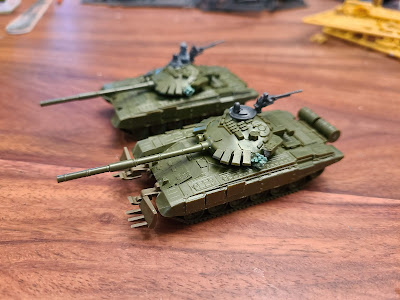 For the two Zvezda T-72's I've recently assembled, I mad a few modifications. I replaced their cupola with a spare Battlefront T-72 version and the AA machinegun (modified to be facing correctly). I also made some smoke dischargers on the side of the turret, since the kit does not have them. My custom job turned out terrible, but at least they are there. Then I added mine plough to one, with more BF leftovers. The Zvezda kits are fine, but the detail does not pop as much as it does on the other tanks but still a good kit. Right now the Zvezda T-72's seem hard to find, whether that is because of the current war or that they were phasing them out already, I don't know. 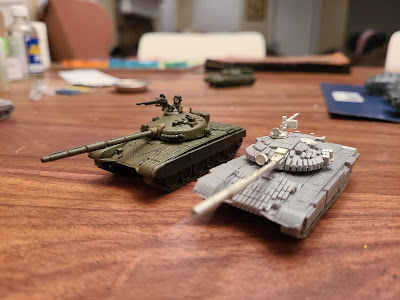 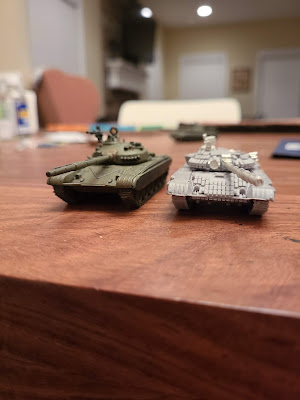 The Khurasan T-72AV is a phenomenal kit! Most of the few complaints I had about the Khurasan T-64BV tanks do not apply to the T-72AV. If is just a little larger, which mean it scales better with the Battlefront tanks (see above photos). Also the 125mm cannon is molded into the mantlet which means it is more secure and less likely to be broken off. The commanders hatch can be glued open or shut. Also there is no trouble with the tracks, as the T-64BV's tracks were a little too long and stuck out too far (sorry, I will try to get a picture to show this on the 64). My only complaint is that they are currently sold out on Khurasan's store or I would have more!

Posted by Amroth at 7:34 AM No comments:

Below are my first three painted 15mm T-64 BV tanks by Khurasan Miniatures. I painted these up with the 2022 Ukrainian tank camo. These were my test models and I have identified several things i can do to improve later versions. But all in all, I do like how these first tanks turned out. 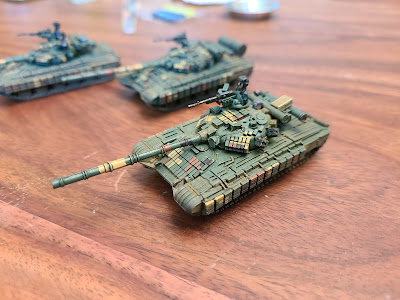 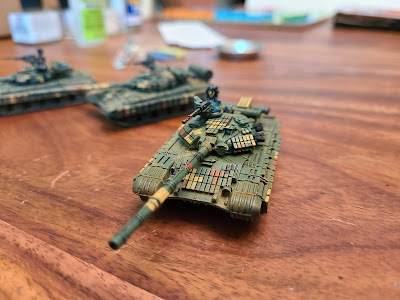 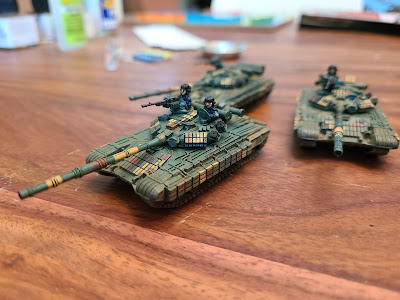 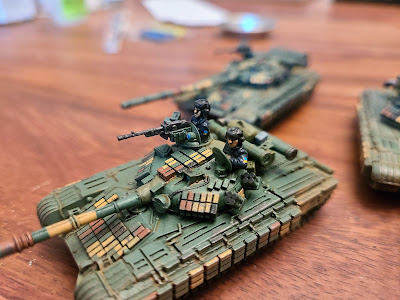 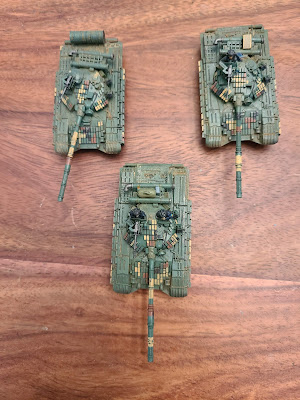 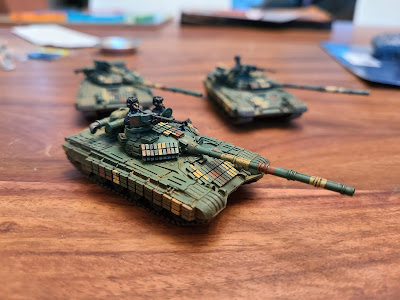 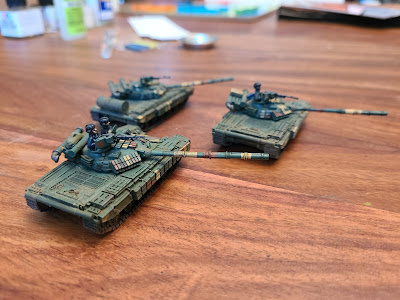 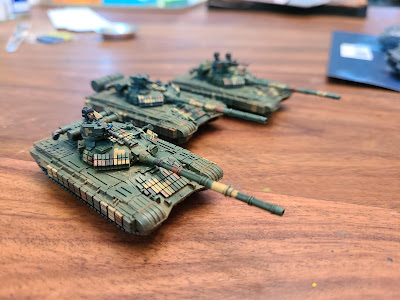 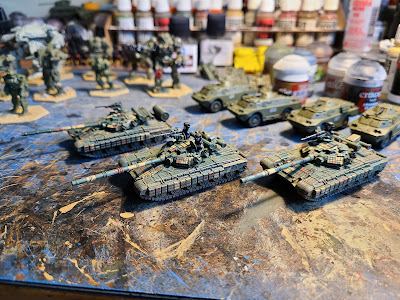 Posted by Amroth at 7:36 AM No comments: 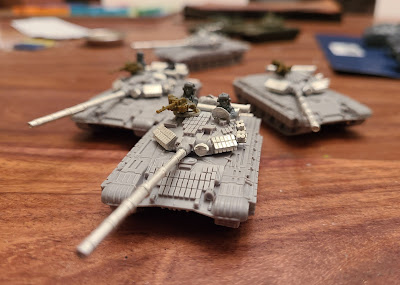 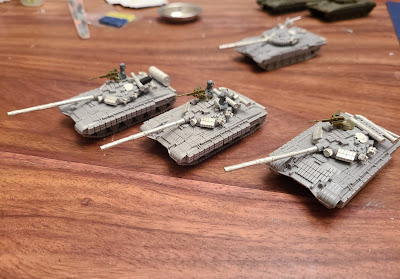 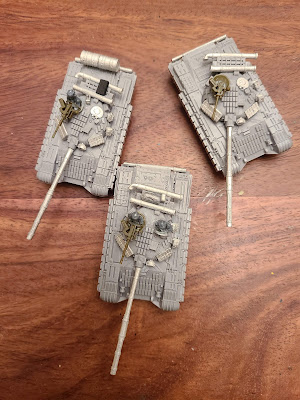 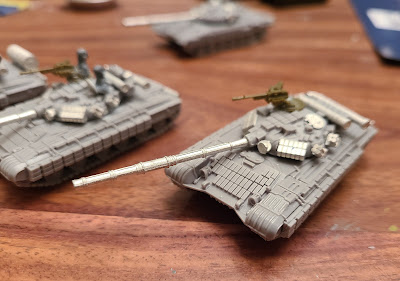 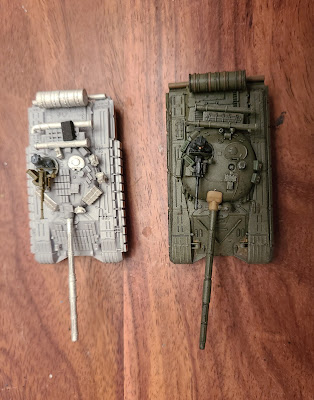 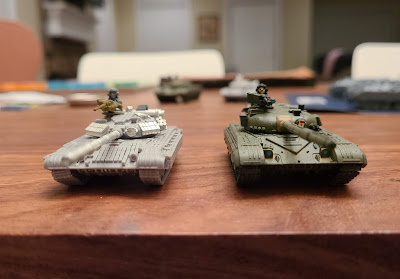 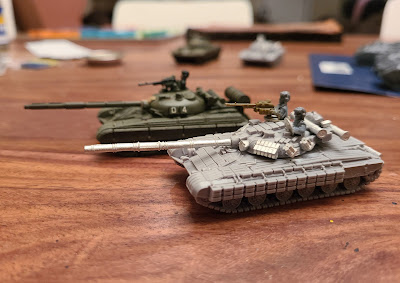 Posted by Amroth at 6:44 AM No comments: